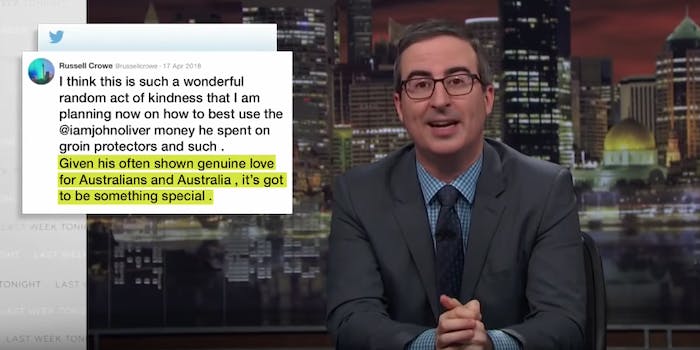 A good-natured celebrity back-and-forth has ended in an unexpected place: the koala chlamydia ward.

Let’s start from the beginning. Back in April, John Oliver bought a handful of movie costumes and props from Oscar-winner Russell Crowe‘s online divorce auction. He was hoping that one of the managers of Alaska’s last-remaining Blockbuster video stores might be interested in hosting an exhibition at their storefront as a way to attract customers and hopefully stay open another year.

Among the items? A vintage leather jockstrap from the film Cinderella Man. Luckily, the manager of the Anchorage Blockbuster was willing to play ball, and the Crowe items are now on display full time for anyone who enters the store.

It gets better. Crowe caught wind of Oliver’s campaign and decided that he wanted to return the favor.

“I think this is such a wonderful random act of kindness that I am planning now on how to best use the @iamjohnoliver money he spent on groin protectors and such,” Crowe tweeted. “Given [he’s] often shown genuine love for Australians and Australia, it’s got to be something special.”

Oliver, a Briton, will sometimes poke fun at Australians on his HBO show. They’re like England’s Florida.

I think this is such a wonderful random act of kindness that I am planning now on how to best use the @iamjohnoliver money he spent on groin protectors and such .
Given his often shown genuine love for Australians and Australia , it’s got to be something special . https://t.co/NcziHy5A2H

I’ve had a eureka moment on how to use @iamjohnoliver from @LastWeekTonight auction money . His random act of kindness is going to be honoured in such a cool way .
Yes, no surprise, it will involve wildlife . @rickygervais @jimjefferies @jimmycarr @edsheeran @edwina_b

Sunday night, the Last Week Tonight host revealed that Crowe had made a donation in Oliver’s name to the Australia Zoo. Specifically, he’d donated to the team that’s working on vaccinating native koalas for chlamydia (there’s an outbreak sweeping the country). He even got the late Crocodile Hunter’s family, Terri, Bindi, and Robert Irwin, to film a video announcing the pièce de résistance: a brand new, state-of-the-art John Oliver Koala Chlamydia Ward at the zoo.