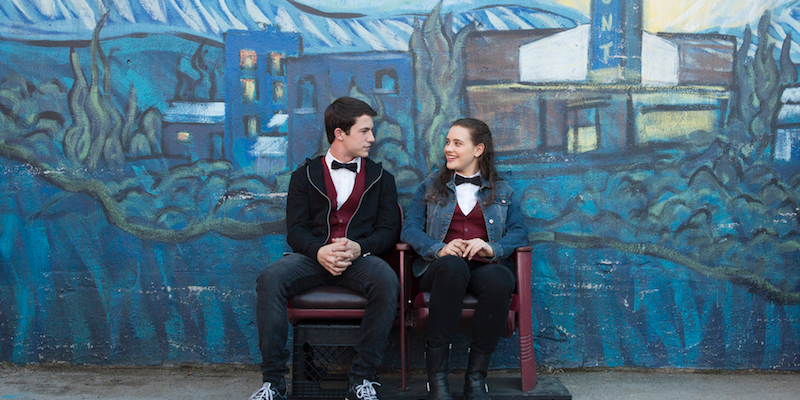 ‘13 Reasons Why’ intimately explores the issue of teen suicide

13 Reasons Why, based on Jay Asher’s 2007 bestselling novel of the same name, is a decade old but its center still holds. Social media has made us “inadvertent stalkers, and we love it,” says protagonist Hannah, by way of explaining one of the reasons she chose to end her life.

Suicide and social media are just a couple of the issues explored in the series. Clay (Dylan Minnette) discovers cassette tapes Hannah (Katherine Langford) made before her death, and they provide the foundation for the 13 episodes. 13 Reasons Why is told in flashback and aftermath; we see Hannah before and after a mortifying photo of her is circulated in less than a minute through the viral hallways of high school. We see her despair after being put on a list that rates girls by their marketable features. Hannah offers the accused a physical map of their offenses: “No chance for the interwebs to make things worse, as it does,” she explains on the tape.

Selena Gomez executive produced the series with her mother, a fitting parallel for a show about how parents and kids attempt to communicate. Gomez explained that Asher’s book felt like the right fit: “I think he understood that I knew what it meant to be bullied. I went to the biggest high school in the world, which is the Disney Channel.”

2 days til @13ReasonsWhy… Here's a 1st listen to my cover of "Only You” from the soundtrack, inspired by Hannah and Clay's story. Out 3/30! pic.twitter.com/aSrAFhpFoY

13 Reasons Why isn’t specifically aimed at teens, but it is yet another push for more streaming young adult content. More traditionally, there’s Netflix’s recent adaptation of A Series of Unfortunate Events, but the platform has also embraced more ethereal stuff with a focus on teens in crisis: The OA and iBoy. 13 Reasons Why sits somewhere in the middle. It also mirrors Netflix doc Audrie & Daisy, which shows the real-life “butterfly effect,” as Hannah says, set in motion when someone is branded “that girl,” and everyone is complicit.

The show never looks down on its young cast; they’re the ones putting the pieces together and dealing with the weight of their complicity. Minette does a good job of vacillating between stubborn and vulnerable—with a few dips into clueless guy territory (Hannah has to explain why being on “the list” is bad). But Langford’s emotional vortex anchors every episode. She gives her character agency, even when others try to take it from her.

The series explores consent and female sexuality. It lingers on the toxic ways guys try to outdo each other, as well as the facades kids put on to divert parents’ concerns. A scene where Hannah’s grieving mom (the great Kate Walsh) takes pictures of the graffiti in the girls’ bathroom serves as a reminder of the permanence of words at an age when you don’t quite know who you are yet.

There are bright spots. Joy Division’s “Love Will Tear Us Apart” returns—perhaps a nod to another film about troubled teens, Donnie Darko—and the soundtrack is solid. (The Sony Walkman might even see a surge in popularity.) There’s comedic chemistry between Clay and Hannah, and the series sketches out how essential and validating female friendship can be as a teen.

However, it feels bound by the 13-episode structure. Some of the stories start to blend together and Clay’s inability to put the pieces together starts to get frustrating. It’s not easy to binge on a show so heavy with pain, regret, and social indictments.

But the central message is important, and perhaps that’s why creators took the long road. This is Hannah’s “truth,” you just have to listen.