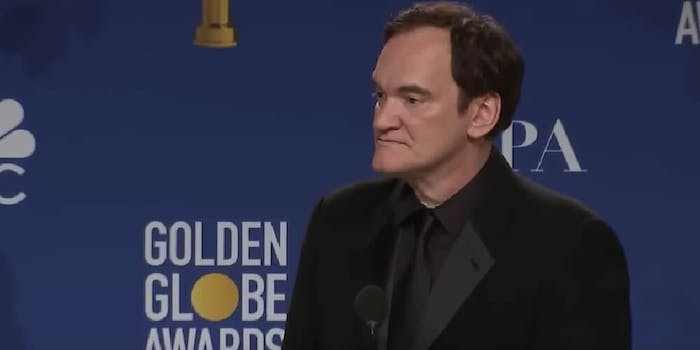 Among other things, he thanked himself.

Filmmaker Quentin Tarantino mansplained his way through his acceptance speech at the Golden Globes on Sunday.

The screenwriter won the best screenplay for the movie Once Upon A Time In Hollywood. He beat out some crowd favorites like Parasite and Marriage Story. But it was the viewers of the acceptance speech who truly lost.

His speech started with a recognition of all the men who have inspired him. Then, it led to thanking his true inspiration–himself.

”Normally, the thing is when I win a writing award–and you don’t share the script with anyone–you write it by yourself. You kinda don’t have anyone to thank. I did it,” he said.

But Tarantino followed up this statement by saying that he did think his cast was especially worthy of recognition. While he listed scenes and moments that stood out from the men’s characters, he thanked actress Margot Robbie for her “goodness,” with no mention of special lines or character developments.

“[She] put more goodness in a movie than I have ever been involved in,” he said.

He wrapped up his speech with some words of appreciation to his wife, who he said is “pregnant with my very first child.”

“Tarantino just claimed his award in his all male category, by listing the lineage of his all male cinematic inspirations. Then ended by thanking his wife for being pregnant with his spawn,” radio producer Starlee Kine tweeted.

Tarantino just claimed his award in his all male category, by listing the lineage of his all male cinematic inspirations. Then ended by thanking his wife for being pregnant with his spawn