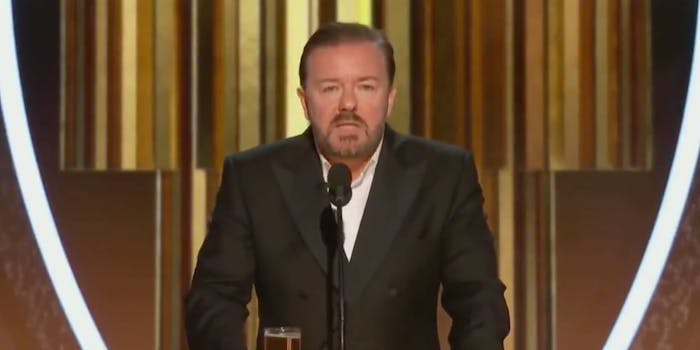 Award shows are known for several things: fancy outfits, misplaced praise, and inflammatory speeches. Golden Globes host Ricky Gervais left no stone unturned in his opening speech, which began with a Jeffrey Epstein joke and ended with him telling award winners to “f*ck off.”

While Gervais hosted the Golden Globes in 2010, 2011, 2012 and 2016, his 2020 speech may be his most inflammatory yet. The comedian addressed several issues that plagued the world of film in 2019, such as the college admissions scandal that put Felicity Huffman in jail, the lack of diversity on- and off-screen, and the dominance of streaming services.

Gervais ended his speech by warning the audience that this was not the platform to give a political speech. In particular, he noted that the nature of many potential political speeches would be at odds with the actions of companies such as Amazon and Apple, which produced several programs up for awards.

“Well you say you’re woke, but then the companies you work for… I mean, unbelievable,” Gervais said. “Apple, Amazon, Disney. If ISIS started a streaming service, you’d call your agent, wouldn’t you? So, if you do win an award tonight, don’t use it as a platform to make a political speech. You’re in no position to lecture the public about anything. You know nothing about the real world.”