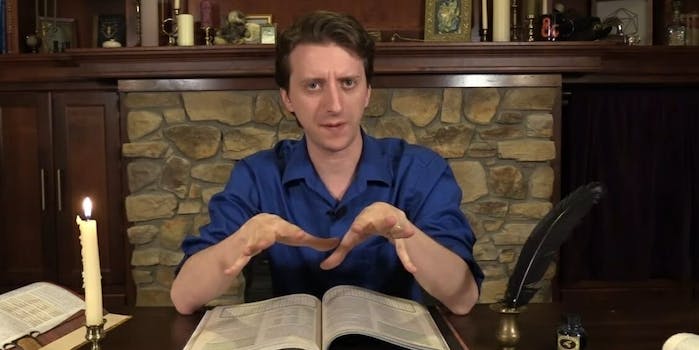 A day after the wife of YouTube star ProJared accused him of infidelity and abuse—and as young fans said he solicited nude photos from them—his subscribers are abandoning him in droves.

In the day since Heidi O’Ferrall tweeted out a long rant about her husband ProJared, whose real name is Jared Knabenbauer, apparently having an affair, Knabenbauer has lost more than 120,000 subscribers, according to YouTube analytics site Social Blade.

Late Wednesday night, Knabenbauer tweeted out a statement saying he and O’Ferrall were getting divorced and that “Heidi’s privacy, mental wellbeing, and discretion has [sic] always been and will remain my highest priority through all this.”

A few minutes later, O’Ferrall lit up the internet with her response, saying she “recently learned that my husband @ProJared has been fucking @HollyConrad behind my back for months.”

From there, she went into excruciating detail about the end of their relationship, saying he had been gaslighting her, blaming her for their marital problems, and untruthfully denying his alleged affair with Conrad, aka Commander Holly.

On Thursday, fans began leaving Knabenbauer’s YouTube channel, as more than 102,000 people hit the unsubscribe button. As of this writing, more than 20,000 had followed suit on Friday morning.

Aside from the infidelity charges, O’Ferrall said Knabenbauer had solicited nude photos from fans “for years.”

“It was ostensibly a body-positive space for consenting adults, and I approved on that basis,” O’Ferrall wrote. “It kept escalating secretly. He started a Snapchat, for getting nudes from fans, without telling me. I found out via a fan comment. I felt pressured to allow it even though I was uncomfortable. Anytime I gave him an inch, he took a mile. I believed that he shut it down in late 2017 (I think???) But now I have reason to believe it continued for long after that. If you have information or were involved in this, I would like to know what really happened. I know a lot of fans participated.”

In a Tumblr post from two years ago, O’Ferrall was asked if she minded that fans sent Knabenbauer photos of their naked body, and she wrote, “No, he shows them to me and we high five about it.”

But some claimed on Twitter that it wasn’t quite so innocent.

One woman said he sent her unsolicited nude photos, and two other people who said they were underage at the time claimed that they had sent images of their naked bodies to Knabenbauer.

“Jared is a grown man. I’m sure he understands that a significant chunk of his audience are [sic] middle and high schoolers,” the Knabenbauer fan named Charlie wrote. “An open invitation to send him nudes is oddly predatory and just kind of messed up for a content creator to put out there, especially when there is a risk of minors … sending you nudes.”

After apparently sending Knabenbauer nudes, Charlie said that ProJared replied back with a complimentary message. Charlie said ProJared never asked about his age. Another Twitter user named Chai who also said he sent Knabenbauer nude photos when he was a minor has since deleted his Twitter account.

Knabenbauer has not responded to multiple messages from the Daily Dot asking for comment, and he has not made any more public statements online.

“During this time you may see a lot of rumors, speculation, and gossip going around,” he said in his initial statement. “I ask that you make your own observations and come to your own conclusions.”

Apparently, more than 120,000 former subscribers have done exactly that.