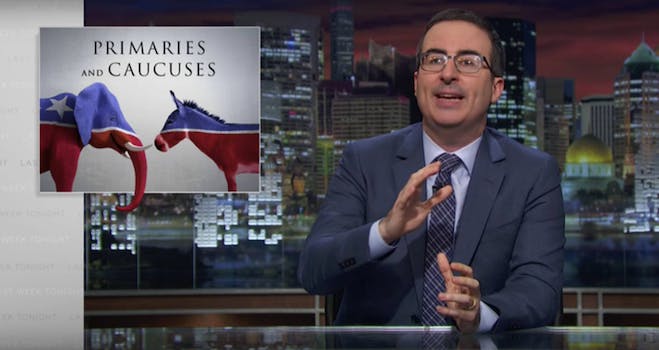 John Oliver explains why presidential primaries are ‘an erratic clusterf**k’

'This is a system which clearly needs wholesale reform.'

John Oliver is here to tell you just how broken the U.S. primary and caucus system is—and how, if we don’t fix it, we’ll keep having problems.

In a segment he could have easily done months ago, the Last Week Tonight host pointed out the problems with the current primary system in both major parties. But the latest problems arise from accusations by Bernie Sanders supporters that the Democratic Party is letting Hillary Clinton bend the rules in the midst of the Nevada Democratic Party state convention chaos.

But the primaries aren’t the only problem. Caucuses are designed in a way that makes it more difficult for people who want to vote but can’t get out of work to do it. Superdelegates are antidemocratic. And whether you’re voting in a primary or a caucus, you’re not really voting for a candidate; you’re voting for a person who pledges to vote for your candidate at your party’s national convention.

The rules are unclear, and Oliver suggested coming together to ask for change after this election is finally over.

“Let’s together pick a date early next year to actually write an email to the chair of each party and remind them—politely—to fix this,” he said. “I propose February 2. Now, that will be easy to remember because it’s Groundhog Day, which does seem appropriate because, unless this primary process is fixed, we are all destined to live through the same nightmare scenario over and over again until the end of fucking time.”