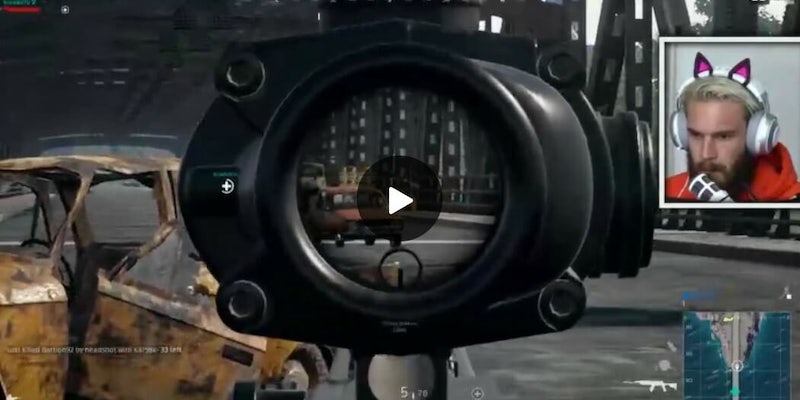 PewDiePie appeared to casually drop a racial slur while gaming

PewDiePie appeared to use a racial slur on Sunday while gaming, and it’s yet another apparent example of the YouTube star making disturbing comments.

While playing PlayersUnknown’s Battlegrounds on Sunday, a frustrated PewDiePie, whose real name is Felix Kjellberg, exclaimed, “What a fucking nigger.” A split second later, he seemed to realize his mistake, saying, “Jeez, oh my God. What the fuck? Sorry, but what the fuck? What a fucking asshole. I don’t mean that in a bad way.” Then, he threw back his head and laughed.

In February, Disney cut ties with PewDiePie when nine videos were discovered of him using anti-Semitic words and Nazi imagery. He later apologized.

“I’m sorry for the words that I used, as I know they offended people, and I admit that the joke itself went too far,” he said at the time. “I do strongly believe that you can joke about anything but I also believe that there’s a right way and not the best way to joke about things.”

After making his racial slur on Sunday, Twitter users were quick to criticize.

Ppl have gotten way to comfortable. Pewdiepie just swinging n****r around like its nothing..smh

I see PewDiePie has learned absolutely nothing over the past year. Oh well.

But not everybody was disturbed.

Hey, can people stop freaking out over Pewdiepie saying the n-word in a heated gaming moment?

Watch, there's gonna be 10 articles about it

In all of this ridiculous outrage, every offended person totally missed the part where @pewdiepie instantly apologized for using the word.

As of this writing, PewDiePie has 57 million YouTube subscribers.

Update 12:20pm CT, Sept. 12: PewDiePie has apologized for the slur in a video posted on Tuesday to his YouTube channel.

“I hate how I now personally fed into that part of gaming,” he said. “It was something that I said in the heat of the moment: I said the worst word I could possibly think of and it just kind of slipped out… There are no excuses for it.”