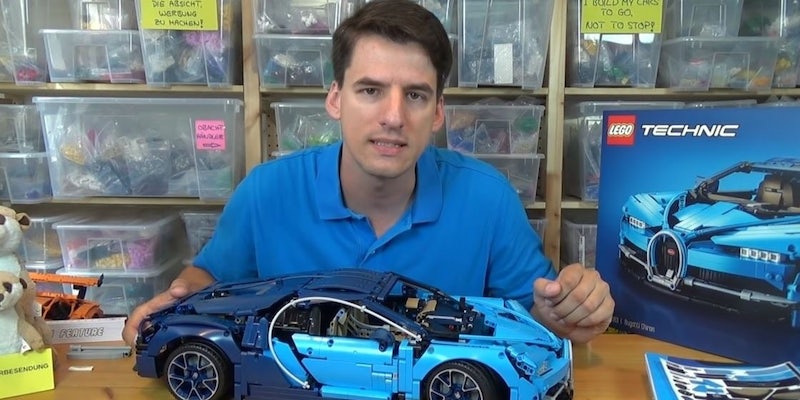 'I talked it down significantly, because I knew it was crap.'

A German YouTuber who has nearly 200,000 subscribers is reportedly being sued by Lego—and he thinks it’s because he gave a bad review to a pricy model.

Thomas Panke, who owns a toy store in Frankfurt, runs a YouTube channel called Held der Steine Inh. Thomas Panke, where he builds and reviews Lego creations. He recently gave his take on a Bugatti Chiron model, and according to the Daily Mail, Lego sued him soon after.

Panke—who used to work in the corporate world but who quit to open his toy shop called Held der Steine (that translates to something like Hero of the Stones or Brick Hero)—said he doesn’t let Lego send complimentary test sets to him. “I am not obliged to Lego in any way,” he said. “I simply review the products.”

And he’s not shy about expressing himself. As Austrian newspaper Kleine Zeitung wrote, he comments “mercilessly [on] the weaknesses of individual models as well as the complete strategy of the toy giant.” His review of the Bugatti Chiron from last June has garnered more than 1.8 million views.

In an interview with YouTube channel klemmbausteinlyrik, as translated by OMR.com, Panke said he originally had expected to sell about 150 Bugatti Chiron sets. But after his review, he only moved about five. “I know most of my customers,” Panke said. “They’re regulars and they rely on my opinions when deciding what to buy. In the case of that model, I talked it down significantly, because I knew it was crap.”

Meanwhile, Lego pointed to his logo, saying it could hurt the company and that it’s the corporation’s job to make “sure that third parties do not use anything that could dilute the Lego trademark, which we believe is the case with logos similar to ours.”

Panke has since designed a new logo featuring a weasel wearing a superhero cape, and it sounds like he’s finished with Lego.

“After the action, I would like to distance myself (from Lego) and not even buy directly from them anymore,” he said, according to the Daily Mail. “Building bricks from other manufacturers will now be featured in my shop and video uploads.”