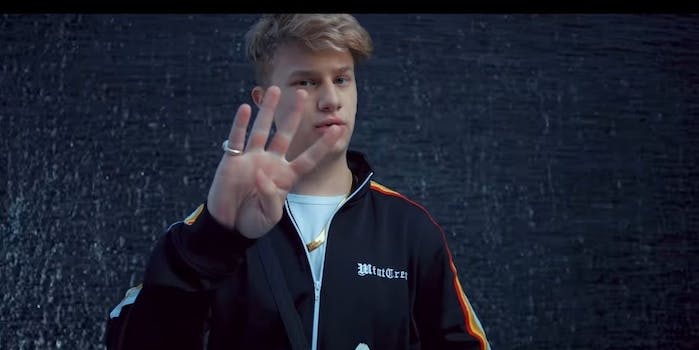 Who the hell is this kid?

In the middle of Shane Dawson’s documentary series on Jake Paul, the episode took a quick break from trying to explore the mind of YouTube’s most controversial vlogger. On a return trip from Walmart, Dawson requested that Paul play the newest song from Justin Roberts, the 16-year-old member of Team 10 who acts like everybody’s little brother.

After the song “Six Figures” began bumping on Paul’s car stereo, Dawson turned into a gushing fanboy. Almost immediately, Paul began gyrating in the driver’s seat, and his ex-girlfriend Erika Costell bounced along with the beat next to him.

It’s a silly moment of levity in the middle of an eight-part series that’s picking at Paul’s brain, but it’s a few seconds that might have altered Roberts’ YouTube career. There’s always been a mystery surrounding the kid. How did he get on Team 10—Paul’s Wu-Tang-esque social media crew of content bros—at such a young age? How did Paul even know about Roberts?

Later in the day, while at Paul’s house, Roberts was summoned to the property to meet Dawson, and when the teenager arrived, Dawson freaked out again. Instead of shaking Roberts’ hand, Dawson kissed it before proclaiming, “I’m not worthy.”

You can see on the video that Roberts is confused by Dawson. Roberts thought he was being pranked.

“I couldn’t tell because I’d never met him,” Roberts told the Daily Dot. “But then he started naming my vlogs from a long time ago, and that’s when I knew he was a fan.”

Find someone who looks at you the way @shanedawson looks at Justin Roberts pic.twitter.com/kQVHYsoGJF

After Dawson featured Roberts on that episode—an episode, by the way, that accumulated more than 14.4 million views—“Six Figures” went viral in a major way, cracking the No. 1 spot on Spotify’s Global Viral 50 chart and recording more than 7.5 million views as of this writing. It happened four months after Roberts had released the song.

“Six Figures” is by far Roberts’ most-watched video on his YouTube channel (1.1 million subscribers). Dawson was a major reason why.

“He gave me that big plug. It was awesome to see he was a fan of mine. It’s cool when people you like end up liking you, too,” Roberts said.

Since releasing “Six Figures,” every vlog uploaded by Roberts has cracked at least 100,000 views—a big upswing from how many views his older videos have earned. In his scripted webseries, “Work In Progress,” Roberts plays an exaggerated version of himself: The social media star who is trying to become an even bigger social media star.

The genesis of the series came after Roberts vlogged every day for six months straight. He was tired.

The weekly “Work In Progress” series has a Curb Your Enthusiasm feel, with Roberts playing a younger version of Larry David who always finds himself in sticky predicaments and not-always-convenient coincidences.

Roberts might have felt like that when he toured with the remnants of Team 10 across the country this past summer. It was the first time Roberts had ever performed in front of a live audience, and suddenly, he was thrust in front of thousands. Sure, most attended YouTube’s version of vaudeville to see Paul. But Roberts, even if he’s viewed as Team 10’s little brother, knew he had fans in the crowd, and he had grown confident from constantly vlogging in front of a camera every day. There was no stage fright.

But again: Who the hell is this kid?

One of the storylines that emerged online was that Roberts’ dad, former sports agent Marc Roberts, had paid Paul to let his son join the team. But Roberts said Instagram star Amanda Cerny, a mutual friend, introduced him to Paul, and the two of them vlogged together one day. Roberts said Paul saw potential in him, and six months later, Paul offered him a spot.

Roberts, though, ran into more controversy when Paul smashed the windshield of the $350,000 Ferrari the then-15-year-old had bragged about buying.

The problem was that, according to the Blast, Roberts didn’t actually own the car, and when Marc Roberts tried to return the vehicle to the company where he had rented it, he allegedly said the windshield had been damaged by a falling tree branch.

That was proven untrue by Roberts’ vlog, which showed Paul destroying it. But ask Roberts if he cares about feeling disrespected by those who don’t believe in him or think he’s just a rich kid with nothing to offer.

“If you care about the haters, you’re not going to go anywhere in this industry …” he said. “When I first started, when I got literally 100 views on my videos, there were more hate comments than nice comments. It just comes with the territory of being present on social media … They’re just jealous.”

Roberts, though, seemingly was born into a wealthy lifestyle, and his latest song has enhanced that reputation.

Ostensibly, “Six Figures” is about how rich Roberts has always been. As he raps, he says he was iced out when he was only 4 years old. He had so much money he couldn’t see the floor. He doesn’t even have to open doors. It’s basically a three-minute brag.

Is this a good song? It depends on how much you enjoy a song like Paul’s mega-hit, “It’s Every Day, Bro.” If you think Paul’s lyrical acumen is impressive and that his rapping is on point, well, you might dig “Six Figures.” If you don’t agree with that, you almost assuredly won’t like Roberts’ hit.

But here’s something to fear. Whether you enjoy the rap or you absolutely hate it, it’ll probably get stuck in your head.

“I hate that this is my favorite song,” one YouTube commenter wrote.

Opined another, “The first time I watched it was a joke…. Now I can’t stop watching, it’s in my head all day and I know all the words SEND HELP.”