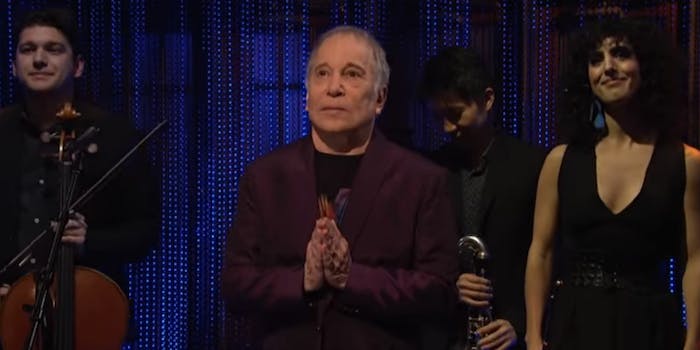 Saturday Night Live has done its darndest to keep up with the times, consistently referencing and riffing on pop culture figures like President Trump and Stranger Things, but on Saturday, the show got nostalgic for old host and musical guest Paul Simon, who hosted during the show’s first season. Some might say a bit too nostalgic, considering a portion of SNL’s audience evidently learned who Paul Simon is for the first time last night.

Haven’t heard of Paul Simon before seeing him on this SNL episode, now I need to look him up on Spotify. Holy moly the performances were good

Simon joined last night’s SNL to perform a string- and woodwind-based instrumental version of “Can’t Run But” from his new album In the Blue Light. “Can’t Run But” was originally from his 1990 album The Rhythm of the Saints.

Turns out an SNL musical performance that wasn’t a rock band, a pop star, or Arcade Fire doing whatever it is they do confused and/or excited some folks.

Wtf Paul Simon what is this song ur performing on snl????? #snl #PaulSimon

Some people were upset that Paul Simon wasn’t more popular with the modern SNL crowd.

I am seeing people saying this is the first time they've ever heard of Paul Simon and GET OUT OF HERE WITH THAT SHIT.

I’m getting a kick out of all the people who don’t realize Paul Simon did a new, topical arrangement of “Can’t Run But” from “The Rhythm of the Saints.” Twitter: lots of opinions, not much historic knowledge. #snl https://t.co/TnJiUczOnt

Does today’s SNL audience know who Paul Simon is?

Some millennials also took the opportunity to put baby boomers in their place.

Of course, it wouldn’t be Twitter without a couple shots at Kanye’s epically awkward praise for President Trump while wearing a MAGA hat, among other antics.

I feel like everyone taking shots at Paul Simon’s performance on SNL right now were probably all about Kanye’s weird furry water bottle fetish shit a few weeks ago. I’m just saying I won’t stand for it. You can meet me and Julio down by the schoolyard and we can settle it.