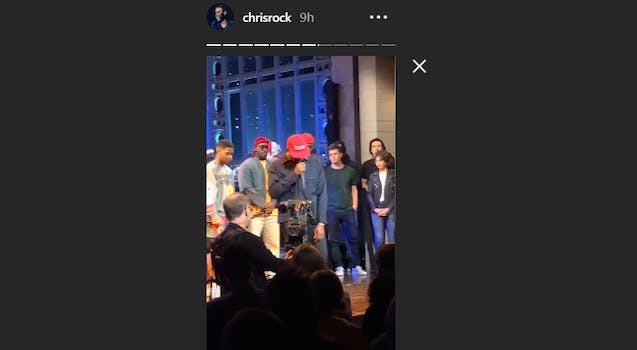 During the breakdown of the evening-closing “Ghost Town,” West began speaking about President Donald Trump and, more specifically, his redesigned-as-a-snapback “Make America Great Again” hat. He called it his “Superman cape.”

“This means ‘you can’t tell me what to do,'” West said, while puzzled cast members like Kyle Mooney and Colin Jost stood onstage.

West has said that he wants to re-purpose the hat and make it a universal, positive symbol of unity. He also complained that “90 percent” of news media is liberal. It’s unclear where that statistic comes from, but on Thursday West reportedly told the Fader that he liked conspiracy theorist Alex Jones. (The magazine, which has partnered with West on projects for nearly a decade, deleted the quote from its original story without a correction or editor’s note.)

After the telecast cut, West continued speaking, sans music, to applause and jeers. Rock filmed highlights and uploaded it to his Instagram Story. “We need to have a dialogue and not a diatribe,” West said, before adding: “So many times I talk to a white person about this and [they] say, ‘How could you like Trump? He’s racist.’ Well, if I was concerned about racism I would’ve moved out of America a long time ago.”

He added, per the Daily Beast: “The Blacks want always Democrats… you know it’s like the plan they did, to take the fathers out the home and put them on welfare… does anybody know about that? That’s a Democratic plan.”

What you didn’t see pic.twitter.com/rsXwdZ1e7I

Performing with Lil Pump and Teyana Taylor, West was loose and playful. He seemed soberly dialed into his performance, despite the rampant cursing during “I Love It.” On that song, West and Pump dressed as bottles of water and became instant internet memes.

Everyone: #KanyeWest is a genius!

Does Kanye know he won't get paid for being in memes?

“I Love It” is basically about a woman with a working-class background who begins hanging out in socialite circles with famous rappers; West jokes about how she’s at restaurants being presented with the “sparkling or still” question for the first time—hence the Perrier and Fiji bottle costumes.

Sunday morning, West seemed to be enjoying the memes, tweeting one himself: