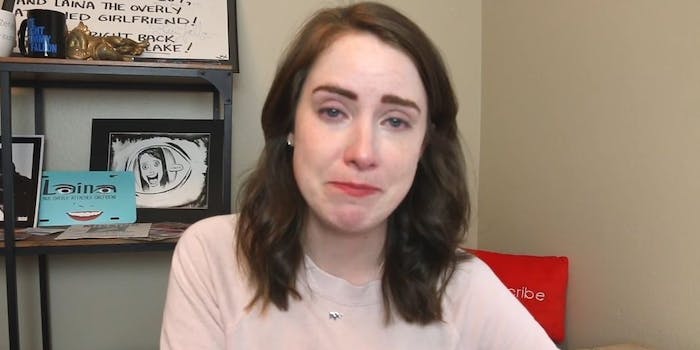 The Overly Attached Girlfriend is leaving YouTube for good

She opens up about her depression.

For the first time in about a year, the Overly Attached Girlfriend posted a vlog on YouTube, and she had some bad news for her 1.2 million subscribers: she’s quitting her life as a YouTuber.

The Overly Attached Girlfriend, whose real name is Laina Morris, said she’s leaving the vlogging world after seven years and detailed some of her struggles with mental health as the main reason why.

“I’ve just grown up and my life has changed and my priorities have changed,” Morris said. “My relationship with YouTube honestly started to become more negative than positive … I know that this part of my life is done and that it’s time to say goodbye.”

Morris shot to online fame in 2012 when she recorded a video for a contest to win tickets to a Justin Bieber concert and to appear in one of his videos. Morris’ video, in which she confessed her obsession with Bieber (though she later said it was simply an act), transformed her into the Overly Attached Girlfriend, sparking a meme that led to a YouTube career.

But after about a year, Morris said she started feeling the weight and the stress of the job.

“I started to feel a lot of pressure to make up my mind career-wise, figure out where I was going to go after YouTube,” she said. “I couldn’t do it confidently. It really stressed me out.”

By the beginning of 2014, Morris started feeling depressed, and she felt the need to keep it a “real deep secret.” She said she felt shame and guilt for feeling overwhelmed with her job.

“I couldn’t understand,” she said, “why I couldn’t handle it.”

She began seeing a therapist, which led her to work with a psychiatrist who prescribed her medication for her depression and anxiety. She also detailed why she found it such a hard decision to actually take that medication.

In 2017, she decided she needed a break from YouTube—before her final video that she uploaded Wednesday, she had only posted once in the past 23 months—but taking a small break lead to a much longer absence than she anticipated.

“In that year, I’ve gone to therapy. I have really thought this through,” she said. “I have time and time again battled in my head, ‘Do I want to do this? Do I want to quit YouTube?’ I’ve come to this point where I can confidently sit in front of this camera and say that it’s time for me to say goodbye to you guys and officially end this thing that I’ve really been holding onto and not wanting to let go of.”

She’s managed to keep her sense of humor, though. In the middle of her emotional video, she asked, “How does it feel to be broken up with the Overly Attached Girlfriend?”