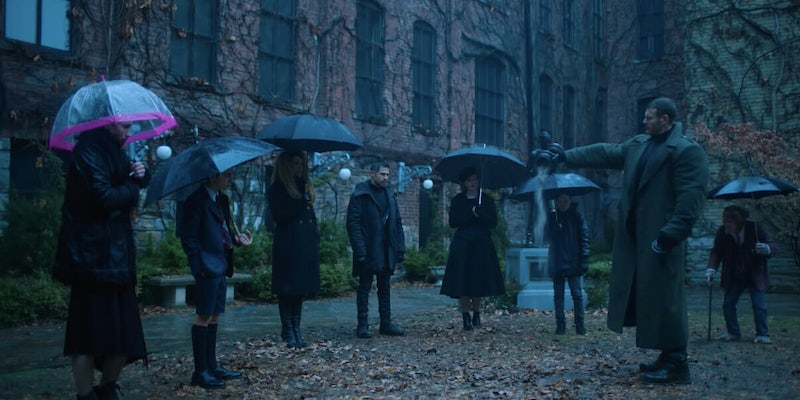 The streaming giant is finally ponying up more numbers.

If Netflix’s recently released first quarter viewership numbers are to be believed, Ben Affleck’s Triple Frontier, superhero series The Umbrella Academy, and the Kevin Costner-starring The Highwaymen are its biggest hits for Q1 2019. The same quarterly report to shareholders revealed that the streaming giant now has over 148 million subscribers globally, more than 60 million of whom are in the U.S.

Umbrella Academy, the Netflix series adapted from Gerard Way and Gabriel Bá’s comic books by the same name, has reportedly been viewed by over 45 million subscribers since it went live on Feb. 15, besting the 40 million viewers earned by the Penn Badgley thriller You within the same period in the last quarter of 2018. Both series have been renewed for a second season.

Netflix also released projections for its other originals. The period action film The Highwaymen, which also stars Woody Harrelson, is supposedly on track to be watched by over 40 million households in its first month. Nature documentary series Our Planet “is tracking to be one of our most successful global documentary series launches yet,” with over 25 million member households projected to watch in the first month, according to the report. The Bear Grylls-starring interactive series You Vs Wild is projected to be watched by 25 million people “spending a lot of time” on the show in its first 28 days, Netflix CEO Reed Hastings and Head of Content Ted Sarandos divulged in a live-streamed interview Tuesday, CNet reports.

If these numbers seem unlikely to you—considering that Triple Frontier and The Highwaymen received lackluster reviews from critics and barely made any positive noise on the internet unlike the popular Umbrella Academy and the controversial Fyre—remember that Netflix counts as a “viewer” any subscriber who has watched at least 70 percent of a film or 70 percent of one episode of a series, regardless of whether they finished it. “Considering the number of people who watch Netflix on a single account, the actual number was presumed to be even higher,” CNet wrote. However, Vox notes that this metric can’t be compared to the Nielsen-measured counterpart for broadcast and cable shows because it’s less rigorous.

So far, Netflix has been selective about which titles to announce viewership numbers for. It has only taken to announcing the numbers of its top-performing originals, like 2018’s Bird Box that was viewed by 80 million accounts in four weeks. There’s no mention of well-reviewed movies like Steven Soderbergh’s High Flying Bird and the Oscar-winning Roma that likely didn’t get viewership numbers that are as impressive.

“Netflix’s selective release of these data points, as well as its test of viewer charts, stands in stark contrast to the company’s aversion to data sharing in the past,” Variety points out. “Up until recently, Netflix executives regularly argued that they didn’t need to share any viewership data with anyone, simply because Netflix was not an ad-supported service that relied on ratings to attract brands.”

So until the streaming company becomes more transparent with its internal data and provides more detailed viewership updates, it’s reasonable to take these unverified numbers with a grain of salt.

“Remember that Netflix’s reported data is meant to be impressive and that without any real peek at their viewership numbers, we have no idea how accurate they are or what kind of spin the streamer may be putting on,” Observer reporter Brandon Katz tweeted.

Remember that Netflix's reported data is meant to be impressive and that without any real peek at their viewership numbers, we have no idea how accurate they are or what kind of spin the streamer may be putting on.

No shade, but Netflix really need to start showing the receipts for these ratings claims https://t.co/8QDS9Jwg5c

Absolutely! It's a joke.

However, the streamer does seem willing to “be more fully transparent about what people are watching on Netflix around the world,” Sarandos said in the call. “Over the next several months, we’re going to be rolling out more specific and granular data and reporting. First to our producers, then our members and, of course, to the press over time.”

A more concrete effort is mentioned in its report: Later this quarter, it’s set to test in the U.K. an upcoming feature that will list the top 10 most popular films and series each week.

“For those who want to watch what others are watching, this may make choosing titles even easier. After a few months we’ll decide whether to end or expand the test,” the company’s shareholder letter read. It’s a smart idea: Viewers are often driven to Netflix content that people are talking about online, and it helps with community building.

Netflix shows the top trending shows and films on its home screen, but it’s curated based on each user’s viewing history. It’ll be interesting to see how many Netflix Originals actually make it to the weekly top 10 list versus licensed content, and how this will shape what viewers decide to watch.

However, this new openness spells something even more self-serving for the company than just enlightening viewers about what others are watching. As Variety points out, it’s a move to soothe investors about the inroads being made by its original films and series. Especially because studios are moving their libraries to new streaming services, the way Marvel shows were canceled on Netflix last year to perhaps make their way to looming streaming rival Disney+. Sarandos did highlight in the call that “Our top ten most-watched shows on Netflix, they’re all Netflix original brands.”

It’s hard to imagine perennial titans like Friends and The Office not on that list, so like a lot of Netflix data—take it with a grain of salt.