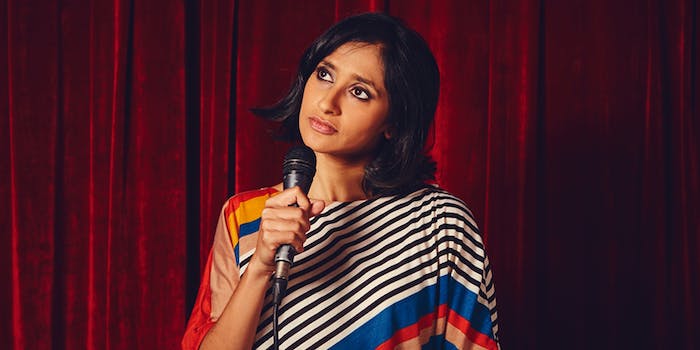 On Just Putting It Out There, Aparna Nancherla’s debut comedy album, she sets the tone quickly: “I feel like we should get right into things, you know, we don’t have a lot of time left… here on Earth.”

The album is the first release from Tig Notaro’s new comedy label, Bentzen Ball Records, an imprint of Secretly Canadian. Nancherla started doing standup comedy in Washington, D.C., and met Notaro at an early Bentzen Ball comedy festival when she was still local. The two reconnected after she moved to Los Angeles, and circuity brought them to this new venture: Notaro says the label’s focus is on names who are “a bit offbeat or not completely ­mainstream, that I think can be with a little exposure.”

Nancherla’s profile has certainly been rising. She makes a few appearances on this season’s Inside Amy Schumer, is getting her own Comedy Central half-hour special, and co-hosts the webseries Womanhood—an “absurdist sendup” of the “conflicting information” women often receive about their lives, bodies, choices at different ages. On the album, she talks about how women’s magazines are littered with ridiculous ideas about body image and self-esteem. “Walk around like you have a sexy secret” is one confidence booster. “Apparently women’s magazines are written by spambots who want more from life,” she muses. She wears a three-piece business suit to the beach to cover up “my main problem area, which is being a woman.”

Nancherla’s dry, observational humor and carefully weighed setups gained her recognition on Twitter, the perfect platform for putting it out there. This delivery is sharpened on Just Putting It Out There.

In one bit, she talks about how working from home has made Netflix the equivalent of her boss: “When it’s like, ‘Are you still watching?’” She talks about the inevitable evolution of clickbait listicles back to their purest form: “51 Burritos Without Makeup” will eventually lead back to “The 10 Commandments.”

But she goes deeper on the album, especially about depression and anxiety. With one sentence, she sets up the dance: “A lot of times I do feel sad for no reason, but then I remember some of the reasons.”

Nancherla says comedy has been a supportive place for managing and speaking about depression, and she’s extended that to Blue Woman Group, her podcast with fellow comedian Jacqueline Novak. Much like her comedy, it explores the minutiae of life while finding humor in daily stressors, like a guided meditation through the opening of one’s Facebook page.

“I think there’s something intimate about podcasts where you’re like literally in someone’s ear and it makes people feel very close to whatever they listen to,” she says. “We’d heard other podcasts about mental health but not as much on the daily, everyday, mundane basis. That was something we were interested in exploring.”

While Nancherla says she’s embraced therapy and self-help, much like fellow muser Maria Bamford, she admits there are still misunderstandings about what it means to live with depression and mental illness. She also addresses having social anxiety, which seems like it would be at odds with performing. However, Nancherla says doing live comedy is actually “less daunting in that you have a microphone and know what you’re doing. You’re addressing a room and they all know why you’re there. It’s more controlled and so in that sense it’s a little less scary.”

Isn't therapy just a podcast off the record

Nancherla’s written for W. Kamau Bell’s Totally Biased and Late Night with Seth Meyers, and says those writers’ rooms were more diverse than most late-night shows. She’s seen the tide turn in terms of representation in comedy, too. There are more platforms for people to make shows and audiences are responding to content that doesn’t involve straight white males, like Broad City and 2 Dope Queens.

On the album, she offers up an anecdote about going to an acting class and doing an exercise where others say what actor you look like. Nancherla, whose parents immigrated from India in the ‘70s, got Mindy Kaling and Aziz Ansari (and also “science”).

She says that’s the most “gratuitous” example of racism she’s had to deal with in Hollywood, but that she actually feels lucky that they came before her and set a precedent: They weren’t going to do the stereotypical Indian roles (Ansari has a whole episode of Master of None addressing this), and it opened up opportunities for other comedians and actors of color.

But Nancherla doesn’t make race the focus of her set, or being a “woman in comedy.” In lieu of applause soundtracking her exit, she ends the album with a “status check” to see how everyone’s feeling, making the journey of listening to a comedy album a collective experience: “We did it,” she says. “And sometimes, that’s plenty.”