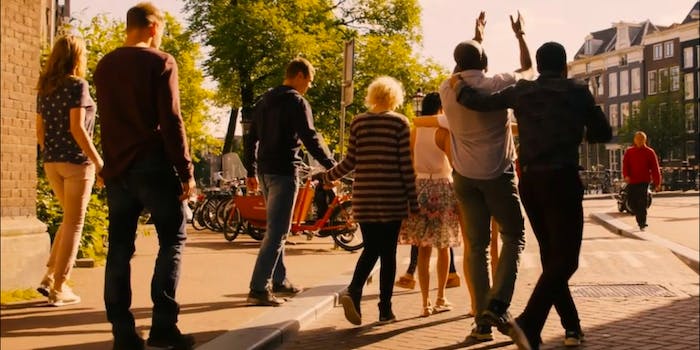 Netflix just canceled ‘Sense8’—and fans are not taking it well

The announcement comes a week after the cancellation of 'The Get Down.'

The dismay of fans, Netflix announced Thursday that Sense8 will not be renewed for a third season.

Netflix didn’t provide an official explanation, although some guess the high cost of production – $9 million per episode—was a major contribution to the decision. Cindy Holland, VP of Netflix original content, confirmed the cancellation in a statement.

“It is everything we and the fans dreamed it would be: bold, emotional, stunning, kick ass, and outright unforgettable,” Holland said. “Never has there been a more truly global show with an equally diverse and international cast and crew, which is only mirrored by the connected community of deeply passionate fans all around the world. We thank Lana, Lilly, Joe and Grant for their vision, and the entire cast and crew for their craftsmanship and commitment.”

The cancellation doesn’t come as a complete surprise. After Netflix announced the cancellation of The Get Down, viewers worried Sense8 would follow suit. Fans even voiced their opposition to the possibility on Twitter, using the hashtag #RenewSense8.

Still, many fans did not take the news well. Some felt it was inappropriate for the streaming platform to cancel a show that features the LGBTQ community on the first day of Pride month.

.@netflix You were supposed to be the one platform that supported shows that are different. #Sense8 is a masterpiece. You cannot cancel it.

10. #Sense8 had MULTIPLE messages about the importance of inclusion and being accepted and why it's okay to be yourself

Others compared the cancellation to the renewal of the controversial 13 Reasons Why, which Netflix just confirmed a second season for.

Imagine. We live in a world where 13 Reasons Why gave us all 13 reasons & earned a 2nd season, but #Sense8 gets cancelled on a cliffhanger.

13RW gets renewed when there's no plot left, but #Sense8 gets cancelled when there are at least 2 more seasons of content,@netflix really? pic.twitter.com/oqFrdC2qrq

Everyone could agree, however, that the cancellation totally sucks.

Hey @HBO Please pick up #Sense8 – one of the best shows on TV.

I can't believe Lito was describing the people who got #Sense8 cancelled pic.twitter.com/UYjsjynrqC

Actors from the series, including Freema Agyeman, tweeted their disappointment as well.

“Dear Sense8 fans, thank you,” Agyeman said. “Your support & enthusiasm has been, & still is, off the scale. And we feel you! What an incredible journey!”

Sorry guys. Thanks for your passion and support these last few days, was very moving to see your love for the show. En Evant! https://t.co/77H3Ob7OGB

Thank you for being a part of our journey. Sensates forever. pic.twitter.com/SClwiY3rwy

News of the decision also comes a day after Netflix founder and CEO Reed Hastings told CNBC at the Code Conference that he thinks they haven’t canceled enough shows.

“Our hit ratio is way too high right now,” he said. “I’m always pushing the content team; we have to take more risk, you have to try more crazy things, because we should have a higher cancel rate overall.”