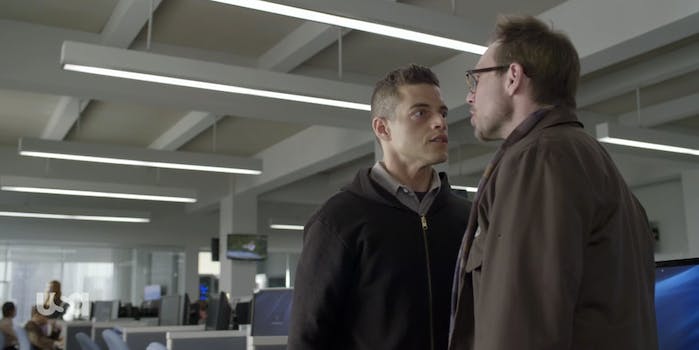 Everything you need to know about ‘Mr. Robot’ in 4 GIFs

The revolution will be hacked.

Warning: This article contains spoilers for season 1 of Mr. Robot.

They won the revolution, but what happens next?

Last year, Mr. Robot, the new drama from USA Network, took over the internet and easily won over critics and fans alike. Fast-paced, intense, and with twists at every turn, it enticed viewers from the beginning, and it contained more than a few eerie coincidences to real life. Add in compelling performances by the cast—and stars Rami Malek and Christian Slater, in particular—and it became something of a cultural phenomenon.

Missed out on it the first time? You can watch the entire first season on Amazon Prime. But if you just want to jump in now and catch up later, here are a few things to catch you up to speed before the season 2 premiere.

Not everything is what it seems

Mr. Robot centers on Elliot Alderson (Malek), a cybersecurity expert with a morphine addiction and a mental disorder (which isn’t explicitly named). He doubles as a vigilante hacker and gets swept up in a hacker group called fsociety—the goal of which is to erase all debt from the world.

It’s very much Elliot’s story, so we’re shown the world from his perspective from the very beginning with plenty of asides to the nameless audience he talks to several times an episode. For that, look no further than the tweaking of E Corp, which Elliot hears and calls “Evil Corp.” And because we’re in Elliot’s head, we see other characters use Evil Corp throughout the entire series.

For the most part, we know what Elliot knows. He blocks out parts of his childhood, including the existence of his sister and the relationship with his mother; he doesn’t even recognize his father until most of the way through the season. Most of his hacks and his life exist on CDs listed with referential albums.

But the biggest instance of this comes in the form of the titular Mr. Robot (Slater), the mysterious and eccentric leader of fsociety. He’s got the plan and other hackers behind him, and all he needs to put it into action is Elliot, someone with the skills and the access to E Corp’s cybersecurity firm.

Toward the end of the season, Elliot discovered what some fans had long suspected: Mr. Robot isn’t real—it’s Elliot himself, and he takes the form of Elliot’s dead father. Mr. Robot pulled a Tyler Durden, if you will.

The technology is pretty damn accurate

Hacking in TV and film has historically not been great—even more so when you ask actual hackers. But Mr. Robot? It’s real and it’s terrifying.

The show name-checks Ashley Madison and DDoS, casually refers to raspberry pi, assumes the audience can follow, uses none of the flash whenever Elliot or one of the other characters hacks into some kind of security system, and shows just how easily someone could possibly get into your accounts. That’s due to the painstaking research and work put into making Mr. Robot as accurate a show as possible with help from technical consultants. And because of that, it’s earned the respect of those within hacking communities.

Now that Mr. Robot is a huge success, the stakes for the characters as well as that accuracy can only get higher.

Every character is in a gray area

Granted, the idea of complete moral ambiguity on a prestigious drama isn’t a new idea; just look at shows like Breaking Bad, Mad Men, and Game of Thrones in the past few years. The opening scene of Mr. Robot is a confrontation between Elliot and the pedophile he hacked and tipped off to the police, and while we get to see Elliot in that more positive role, it’s just a taste into what lengths he’ll go to in order to do what he thinks is right. Is it? That’s more difficult to discern.

At one point during the season, Elliot starts dating Shayla, his neighbor and drug dealer, and reports her supplier, Vera, to the police after discovering that Vera raped her. In retaliation, Shayla is held hostage and threatened unless Elliot busts him out of jail. It works, but Shayla dies anyway.

That ambiguity extends beyond just Elliot and the questionable ways Mr. Robot wants to achieve his goals. Angela (Portia Doubleday), Elliot’s best friend and colleague at Allsafe who he has an unrequited crush on, is blackmailed after her then-boyfriend put malware on her computer. She saves herself, but not before framing him for it. She goes after E Corp after fsociety leaked information implicating it for the death of her mother, but she later takes a job with them.

And Tyrell Wellick (Martin Wallström), who’s one of the show’s antagonists and a prominent face of E Corp for the audience, has just as much at stake. He’s trying to climb the corporate ladder to become CTO and there’s nothing he isn’t willing to do, whether it’s seduction, blackmail, and even murder. His wife, Joanna, is just as willing and at one point induces her own labor to stop the police from interrogating Tyrell. When it all blows up in his face, he goes into cahoots with Elliot.

The revolution will be televised

Season 2 of Mr. Robot has a lot to live up to—and some people have already seen the premiere episode after it was “leaked” on social media. And the battle is just beginning.

The FBI is trying to take down fsociety and punish it for what it did, but Elliot will also struggle with keeping Mr. Robot in check. Elliot won’t be the only person feeling isolated. And there could be a confrontation with Dark Army—another group of hackers whose leader, Whiterose, both gave Elliot vital information and was seen chatting with E Corp’s CEO after E Corp’s data was destroyed.

“Control is … the major theme in season 2,” Kor Adana, a staff writer on Mr. Robot, told Wired. “How much control you have. Whether things are predestined, whether you have the ability to change your fate. You’ll see that with the dynamic between Elliot and Mr. Robot as Elliot struggles to maintain this part of himself or try and control this part of himself. There are some other things that I can’t really talk about in terms of other types of books and callbacks to religious metaphors that you’ll see in season 2, but by the end of the season, you’ll feel that you get a lot of it.”

And now we’ll be watching.