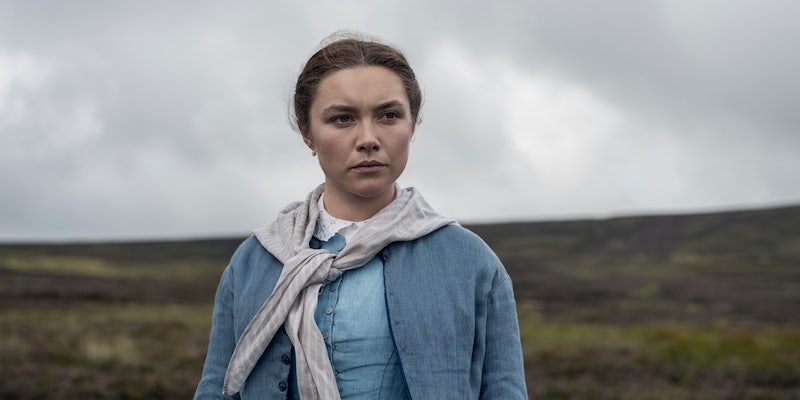 This Irish historical thriller stars Pugh as a nurse, caring for a girl who can seemingly survive without eating.

Much as I appreciate an experimental framing device, The Wonder’s unusual prologue doesn’t add much to the experience. While 99% of the film is a historical drama set in 19th-century Ireland, the tale is bookended by scenes in a modern studio soundstage, hanging a lamp on the idea that this is just a story, and is therefore open to interpretation. But isn’t that true of all historical fiction? In the end, this device feels like an unnecessary gimmick, adding a dash of quirkiness to a tense, mature drama that makes good use of the always-brilliant Florence Pugh.

Adapted from a novel by Emma Donoghue (who co-wrote the screenplay with Alice Birch and director Sebastián Lelio), The Wonder stars Pugh as Lib Wright, an English nurse who is hired to perform a peculiar task in rural Ireland. 11-year-old Anna O’Donnell (Kila Lord Cassidy) has supposedly survived for four months without eating, and Lib’s new job is to watch her day and night. Is Anna really a miracle child, or is she finding some way to sneak food on the sly?

As modern viewers, we immediately suspect that Anna is a fraud. So does Lib; a practical woman with little patience for the devout Catholic faith of Anna’s family and neighbors. But Anna’s inexplicable survival has made her a local celebrity. Pilgrims visit on a daily basis, convinced that she’s been chosen by God. While Lib expects to disprove Anna’s claims, her employers—a committee of dour old men including the parish priest and the local doctor—just want her to be a neutral, obedient observer. Many of these interested parties have obvious skin in the game, including the obvious appeal of presenting Anna for sainthood. The power dynamics here are hard to miss, as these men exploit a child who may die of starvation if her story isn’t true.

Emma Donoghue’s novel was inspired by the long-running phenomenon of “fasting girls,” overlapping with other examples of young girls who report supernatural experiences: Girls who witness poltergeists, who take pictures of fairies, who speak to the dead, who suffer from mass outbreaks of unexplained tics and seizures. Consciously or unconsciously, these events often seem like an understandable attempt to exert control over a world where you otherwise have no power. A farmer’s daughter in 19th-century Ireland would have plenty of motives to present herself as a holy miracle.

At 26, Florence Pugh already has such a clearly-defined artistic brand that I can safely describe this as film as “very Florence Pugh.” She specializes in playing women who are trapped and tormented by circumstance, and even when those movies aren’t very good (Black Widow; Don’t Worry Darling), Pugh herself is always a commanding presence. Lib Wright is one of her more subdued performances: A serious and self-contained young woman who is forced to go against her professional instincts. Rather than caring for Anna as a normal nurse would, she’s ordered to sit and watch while a child refuses to eat, presenting Lib with an increasingly complicated moral dilemma. Does she want to outwit a potential hoax, or does she simply want this child to survive?

In the background, there are larger forces at play—the Catholic church, international newspaper coverage, memories of the Irish potato famine 20 years ago—but ultimately this is a small-scale story about faith and stubbornness. Shot in gorgeous shades of blue, grey, and firelight by Ari Wegner (The Power of the Dog), the landscape provides a bleak backdrop for a compelling personal drama.

Oddly though, the contemporary framing device feels even more superfluous when it returns for the final shot. Lelio’s message about history-as-storytelling suggests that we’re in for an ambiguous story where everything is left open to interpretation, inviting us to share the worldview of people alive in the 1860s. But in the end, we’re given a straightforward conclusion, leaving little doubt about young Anna’s “true” experiences.