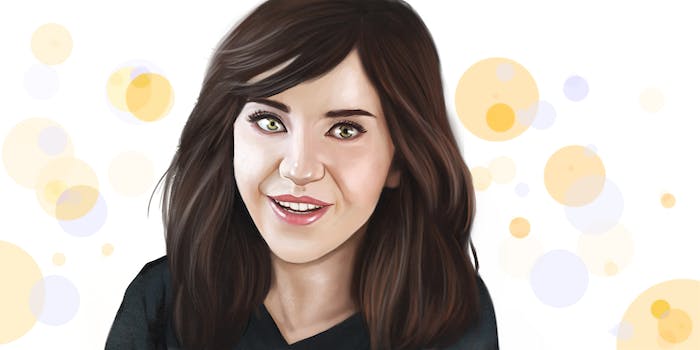 #WCW Melanie Murphy is here to cheer your body on

You'll trust her, because she trusts you with her stories.

When Melanie Murphy tells her fans that things will get better, that the acne will clear up or that with proper help one can conquer their eating disorder, she’s speaking with care and from experience.

Only 27 years old, Irish vlogger Melanie Murphy is wise beyond her years. Just last week, her honest chat about her bisexuality spurred a tag across YouTube with creators like MissFenderr and AConMann opening up about their own experiences. This isn’t the first time Murphy has spurred major conversations online.

She first started on YouTube in 2013 while attending college and working as an extra for shows like Viking and Penny Dreadful. After school, YouTube morphed into Murphy’s full-time job and over the past four years, allowed her the space to advocate, heal, and create. Her channel is crisply organized with playlists on PMS, sex, sexuality, mental health, beauty, self-love, books, and her beloved food diaries.

What connects her vast library of nearly 400 videos is the genuine enthusiasm and honesty Murphy uses to approach each piece of content.

“I was starting to like myself around the time I set up the channel in the summer of 2013. I’d been through hell with depression, eating disorders, grief but a few chance encounters and some good grades at university filled me with a new sense of confidence, and that sparked me to finally give it a go,” Murphy shared in a recent interview with Metro. “It seemed like so much fun! Looking back on older videos, you can tell how shy and reserved I was. I even remember re-filming videos because I didn’t like how I looked or sounded. It’s been beautiful to see myself grow through the past three years into this bubbly, fearless human.”

The road has not always been easy for Murphy. Long before YouTube, Murphy’s teenage years were a collage of acne, bullying, questioning her sexuality, and a first love that ended with an unexpected pregnancy. After losing the baby and, soon after, her grandmother, Murphy began fighting depression, anxiety, and panic attacks. In her “Draw My Life” video, Murphy opens up about her years battling over-eating, orthorexia, and the relationships she rushed into. When you listen to her videos, it feels as though you’re talking with a very old friend. You trust her because she trusts you with her stories.

Her food diary series is one of the most unique aspects of her channel. For many lifestyle vloggers, food diaries are a way to show fans what they’re cooking and consuming in a week. But Murphy’s series has a deeper purpose. As an eating disorder survivor herself, Murphy uses her food diaries to show balance and the ongoing process of recovery when it comes to her relationship with food. Her goal is to reinforce the idea: If I can overcome an eating disorder, so can you.

For Murphy, 2017 is a year of infinite possibilities. She will be sending in the final draft of her next book while continuing to upload at least two videos a week. As a longtime fan of her channel, it has been a pleasure to watch Murphy evolve into a self-assured, thriving young woman. To fans like me, it’s not only Murphy’s message of self-love but her example of it that is making the YouTube ecosystem a more honest, empowering place.