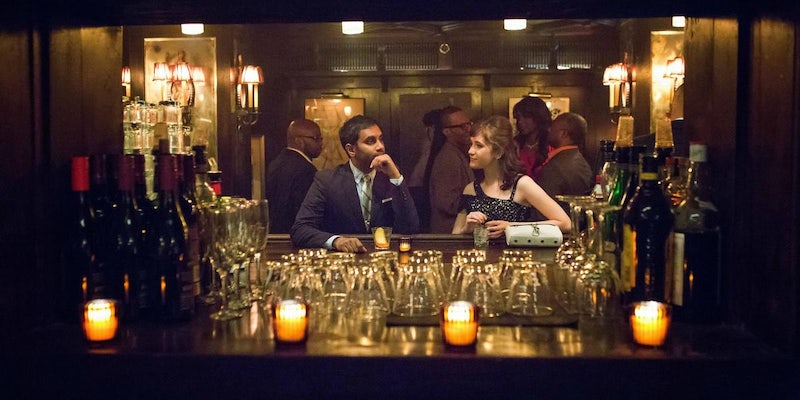 Why you should be watching Aziz Ansari’s ‘Master of None’

The new series gives us a lot to consider.

You’re having sex with a stranger and the condom breaks: What do you do?

This is one of the first questions we have to consider in Master of None, as we quickly and intimately get to know the show’s protagonist, Dev, a 30-year-old struggling actor living in NYC. A new 10-episode Netflix show created by Aziz Ansari and former Parks and Recreation producer Alan Yang, Master of None is certainly one of the more diverse shows Netflix has released. Dev is a channel for Ansari’s experience, one that’s fleshed out by his circle of supportive friends: Denise (Lena Waithe), Brian (Kelvin Yu), and Arnold (Eric Wareheim). Most of their convos happen in cool bars or clubs; drinking is the social lubricant of choice.

If you watched Ansari’s Netflix standup special, you’ll recognize a couple of repurposed bits in Master of None. One, about his generation being selfish and ungrateful, in contrast with the struggle of his immigrant parents (who are played by Ansari’s real parents), provides the foundation for episode 2, in which the backstories of Dev and Brian’s Indian and Taiwanese fathers are paralleled. “Fun is a luxury only your generation really has,” Dev’s dad says.

The other is a bit about how text messaging has made us flaky, especially in terms of dating; this shows up in episode 3, which is based on a story by late Parks and Recreation producer Harris Wittels. Master of None is also an extension of Modern Romance, Ansari’s recent book on dating, which he co-wrote with sociologist Eric Klinenberg. Ansari got called out for writing a book about modern romance without ever having tried online dating, but he still manages to add a sense of dread to scenes where he’s desperately awaiting a text from a potential date while making it all about him. Later in the series, we see a year in the life of Dev and his love interest, Rachel (Noël Wells, formerly of SNL), told entirely through a series of morning interactions. It’s sweet and sad and real, and it’s exciting that a half-hour sitcom is playing with format like that.

This is a show with a man’s point of view about love and sex and dating, but Rachel provides a much-needed window into women’s experiences (as does Denise, a lesbian who’s far more successful at dating than Dev). Rachel’s smart and funny and calls out Dev on clueless-guy shit (an education about Instagram comments was particularly memorable). There’s one episode devoted to women’s perspective: In “Ladies and Gentlemen,” a fellow actor friend of Dev’s is shown walking home at night, terrified of who might be following her, while Dev and Arnold practically skip home—an experience that allegedly came from women in the writers’ room. Later, ladies gather around Dev at a bar as he commiserates with one woman who was told to “smile more” on the street: “Why should you smile more?” he asks. “Because women get paid 23 cents less on the dollar than men do? Because the government’s trying to regulate your body?” (Props to whoever included X-Ray Spex’s “Oh Bondage Up Yours!” in the end credits.)

While Ansari has embodied the “nice guy” in his standup and on Parks and Recreation, that lady-ally chorus gets a little loud in parts—he quotes The Bell Jar in a later episode. But “Ladies and Gentlemen” shows a man at least trying to put feminism into action, even if it doesn’t go that well; it’s Rachel who later points out the clueless-guy shit, after the director of a commercial Dev’s in introduces himself to all the men at a table, and ignores the women.

The show is more powerful when it tackles experiential issues—fame, racism in Hollywood, Dev’s relationship with his parents—and when it poses big questions: Is there such a thing as ethical cheating? Do we settle for the lover we have or hold out for something better? Why can’t there be two Indian characters on a TV show? Is “Lose Yourself” told from the perspective of Eminem or his 8 Mile character?

The one series-long thread in Master of None involves Dev’s role in a blockbuster action movie—a “black virus movie,” as he calls it—but the show doesn’t hinge on throughlines. Rather, Dev’s questions about how we should be and react push each story forward, and every episode stands as its own lesson.

Ansari’s had good luck with Netflix, and the company was smart to bring in a semi-autobiographical, personality-defining sitcom, à la Louie; it’s a nice contrast to Unbreakable Kimmy Schmidt, Hulu’s Difficult People, and Amazon’s Catastrophe. Master of None isn’t heavy on punchlines, favoring conversation instead, observational standup writ large. It has some weak spots early on, but it gives us a lot consider by the end.