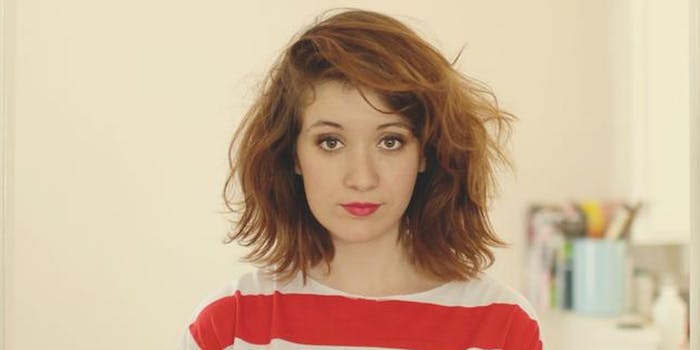 Noël Wells and the new era of YouTube comedy

Noël Wells stands onstage at the Velveeta Room in Austin, Texas, with a bag in her hand. She slowly takes out items of clothing, commenting on their aesthetic, like a modern-day Goldilocks: This one’s too retro; this one’s too modern; this one’s too ugly. If you’ve ever been broke and sold your clothes at Buffalo Exchange, her impersonation of a dead-eyed employee is dead on.

Wells was part of the four-day Moontower Comedy & Oddity Festival, which gathered an impressive lineup of comedians across 10 Austin stages. Wells performed four times during the festival and told me that it was her first time doing standup. That first night, she looked a bit nervous.

Impressions are Wells’s strong point, however. Her popular YouTube channel is heavy on impersonations of Michele Bachmann, Zooey Deschanel, and Dana from Homeland. She also created other personas like Manic Pixie Nightmare Girl.

Last year, the 27-year-old joined the cast of Saturday Night Live. During the show’s opening monologue earlier this month, Wells did her “Beth Rogen” impression, which consisted of mimicking host Seth Rogen’s stoner laugh. To hear Wells explain it, she’d been offering that impression to the world for a while.

“I’d written a digital video with me and Seth Rogen, where I was his little sister and he was introducing me, and I was really cute but then I had that laugh,” she says. “And me and him got really bro-y. It did really well at the table but they didn’t pick it, so they just wrote me into the monologue.

There was an assumption that SNL producers were scouting YouTube for this year’s cast, and though Beck Bennett and Kyle Mooney were involved with Good Neighbor, and Sasheer Zamata and Mike O’Brien have a heavy YouTube presence, Wells says the cast wasn’t entirely picked up there.

“I think that was kind of a misconception,” she says. “Just as performers, I think you’d be an idiot not to utilize YouTube. I think now if you want to go into comedy, you might as well try to work things out via YouTube. But I think the process of SNL is still pretty formal. You make an audition tape, your agent sends it in, they watch people’s tapes, and then they invite people to perform at a comedy club in Los Angeles or New York. But I don’t know how much actual scouting they do online.”

Even if cast members weren’t necessarily scouted online, they’re still creating SNL-approved content there. Lorne Michaels’ Above Average Network YouTube channel was launched in the summer of 2012 as a place for alternative digital shorts, like this fantastic clip from Sasheer Zamata:

Across the four nights of Moontower, there was plenty of room for comedians to try out new material, as Wells did. There were also a handful of veteran acts working the crowd in an era where bits can be instantly discussed and dissected on social media, and where the comedian-fan relationship can take many different shapes.

On Saturday night, as contemporary comedians were hosting a set based around submissions from the anonymous app Whisper, ‘90s sketch comedy icons the Kids in the Hall performed a reunion show, and while they kept well-known scenes intact for die-hard fans, they also took selfies and referenced Twitter, Lululemon, and cyberbullying. It was a bit jarring, but I did wonder: If Kids in the Hall were a YouTube sketch group starting out today, would they be as successful, or were they a distinctly ‘90s entity? During his headlining Thursday gig, Bobcat Goldthwait took shots at Jimmy Fallon for being a bad interviewer. “Johnny Carson used to interview authors,” he said, lamenting that now if Meryl Streep is on the show, she’s reduced to breaking eggs over her head for a viral clip.

This season of Saturday Night Live has similarly focused more on meta-pop-culture references, no doubt a result of having a younger, more savvy cast. It’s also competing with a wealth of sketch comedy on YouTube, Funny or Die, and College Humor. Wells explained the writing happens pretty fast, something former SNL cast member Fred Armisen echoed in his Saturday night Moontower set.

“On Monday you have a pitch meeting in Lorne’s office, where all the actors and writers pile in, and the host is sitting in a chair, and half of us are sitting on the ground looking up at him,” she says. “You pitch one to two ideas that are really short, and hopefully they get a laugh. If they get a big enough laugh, you might want to write it. Tuesday night’s spent writing one to three pieces, then you do the table read, and by the end of Wednesday night they pick the show. It’s a very fast process.”

When I caught up with Wells a few nights after her initial performance, at an all-ladies set called She-Bang, she was more relaxed on stage. She did the Buffalo Exchange bit but also brought out Lena Dunham and Holly Hunter impressions. It’ll be interesting to see what else she has in her bag.