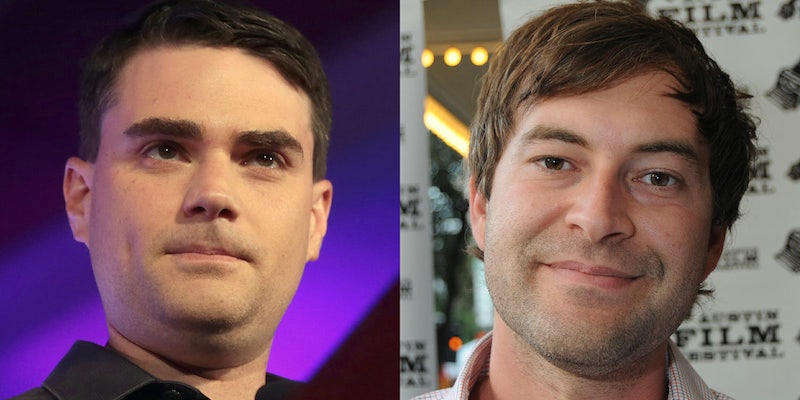 The actor and producer said the tweet 'was a disaster on many levels.'

Filmmaker and actor Mark Duplass has apologized after getting some heat from his “fellow liberals” for a tweet endorsing conservative pundit Ben Shapiro.

Duplass posted the tweet on Wednesday afternoon and it has since been deleted, but he urged “fellow liberals” who might be contemplating “crossing the aisle” to follow Shapiro, editor-in-chief of conservative site the Daily Caller. “He doesn’t bend the truth,” the tweet stated. “His intentions are good.”

Perhaps Duplass hadn’t read Shapiro’s past articles or his racist, homophobic, transphobic, sexist tweets and only knew him as a guy “who once helped me for no other reason that to be nice,” but the internet quickly delivered.

Hey @MarkDuplass and other liberal celebrities PLEASE stop doing this. He delights in bending the truth. His intentions are not at all good. pic.twitter.com/EwC4yMo4gI

Others pointed out that this isn’t the first time Duplass has apparently tried to cross the aisle.

Mark Duplass deleted his Ben Shapiro endorsement but he has been on this path for a while. pic.twitter.com/pURa2O6m6z

Guardians of the Galaxy director James Gunn tried to squeeze out a “there are bigger targets” defense.

Not everyone can be right all the time about everything, and, if you think that's possible, then eventually you're going to be standing by yourself, "right," but alone. 2

Mark Duplass tweeting how you should follow an asshole because he thinks it's the kind thing to do simply can't be the bar for moral outrage.

Today's Leftist lesson on Twitter: write a nice tweet about someone with whom you disagree politically, get labeled a racist sexist homophobe. Good stuff, guys. Really showing that tolerant streak.

Duplass, who recently produced the Netflix doc Wild Wild Country and HBO series Room 104, posted an apology of sorts on Thursday morning, stating that the tweet was “a disaster on many levels” and that his “goal has always been to spread unity, understanding and kindness.”