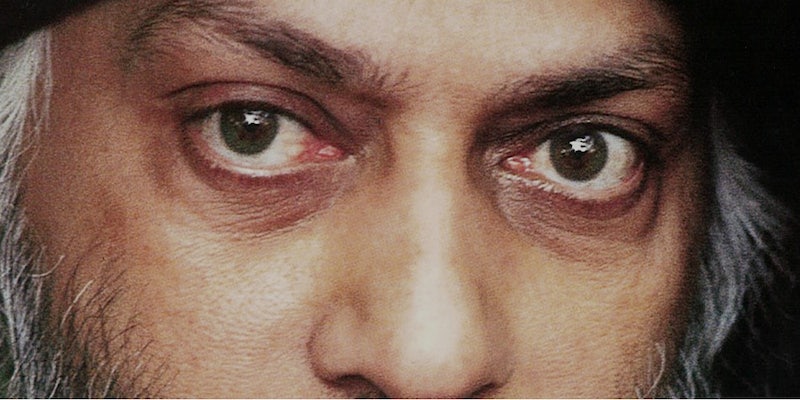 Netflix's 6-part docuseries will astound you.

Wild Wild Country, the new six-part Netflix documentary series, will both astound and frustrate you.

Filmmakers Chapman and Maclain Way dug through 300 hours of footage and interviews to present the story of Bhagwan Shree Rajneesh, an Indian guru who moved his following to a ranch in Wasco County, Oregon, in 1981 in an attempt to build a utopia of religious freedom and higher thinking. As his followers, dressed in red, descended on the ranch, the neighboring working-class town of Antelope, Oregon, population roughly 40, took notice. And it only gets weirder from there.

It was a perfect collision of subcultures, and Wild Wild Country sketches out the religious fervor and paranoia of the time: this was post-Jonestown massacre. But its intense focus is on Bhagwan, his personal secretary Ma Anand Sheela, and the various other enablers and power dealers of this supposed utopia. Through unreal first-hand archival videos and present-day interviews, the Ways outline how the invented town of Rajneeshpuram went from idealistic spiritual community to a harbor for assassination attempts, brazen poisonings, immigration fraud, and mass surveillance.

After their 2014 Netflix documentary The Battered Bastards of Baseball, which explored the failed minor league Portland Mavericks, the Ways were approached by an archivist in the Northwest who promised rare footage of “the most bizarre story in the history of Oregon.” It’s a story you probably haven’t heard of. In the nearly 40 years since it’s somehow managed to remain a regional footnote. But that worked to their advantage, as they were offered footage from local news stations and older documentaries that were given open access to Rajneeshpuram. The local news reports, in particular, were kept intact by someone—editors, producers—who knew it was a story to document, so they were never taped over.

The most vexing personality in the doc is Sheela, whom the filmmakers track down in Switzerland. She met Bhagwan at 16 “and that was the end of me,” she says. Early on she promises that Bhagwan is the second coming of Buddha, and you do get a sense of why she connected with the guru, especially when she was young and impressionable. Bhagwan was something of a rock star in India, and the first episode retraces his tracks in an effort to lay the foundation for the rest of the series. In one early speech, he says “the awakened man will be the new man,” which foreshadows the dysfunction to come.

Much of that dysfunction appears to originate with Sheela, whose outspoken nature makes her Rajneeshpuram’s figurehead. One resident of Antelope compares her to Hitler. But as the series moves on, whether she was the true villain becomes less clear. As the commune grows, the goals become loftier. Followers are allowed to assemble a police force, much to the horror of Antelope residents. They then set their sights on an upcoming city council election, and more nefarious tactics are used, such as the mass poisoning of a town outside the commune with salmonella, in an effort to get them not to vote, and the bussing in of homeless people to help the voting effort.

The Ways said that within minutes of speaking to Sheela they got the sense that she’d never gotten to tell her side of the story. They would “challenge her here or there,” says Chapman, “and what we came away with was just a really fascinating interview with a woman who is still, years later, battling for her ideologies and her convictions and what she believes in.”

Maclain adds that they weren’t interested in doing a true-crime series, with the emphasis on “who did it.” Their goal became more about figuring out how Rajneeshpuram got to the point where followers were putting beavers in blenders to poison the water supply, so it’s up to the viewer to figure out who’s “spinning you.” They also interview Bhagwan’s former lawyer, who, though he seems to have his wits about him, still has a faraway look in his eye and an unwavering devotion to a man people called “master.” Only one former Rajneeshee, Jane Stork, who was part of Sheela’s inner circle and attempted to kill Bhagwan’s doctor at Sheela’s request, really voices regret.

While the Ways keep a familiar circle of talking heads, the archival news footage and interviews are much more informative. In one clip after Sheela has fled Rajneeshpuram, Bhagwan, who had allegedly not spoken in three-and-a-half years, calmly tells an interviewer: “She did not grow up to be a woman, she grew up to be a perfect bitch.” Unfortunately, the viewer doesn’t have more of a sense of who Bhagwan was by the end. Was he really the one pulling the strings? Was it Sheela? Or was it someone the Ways didn’t get access to?

“The group is known as a terrorist sex cult,” says Chapman. “And referred to by many we’ve spoken to, government officials and locals, as pure evil. So I think the interesting thing with six-and-half hours is that we got to peel back the different political layers and social layers and look at what led this group to this moment, leaving the viewer more open to interpretation.”