'I knew right away that I [would] have problems with Google.'

Days after Google took down his Logan Paul Suicide Forest Run app, the developer is back with a new game. And it’s basically the same game with a new name.

The Android game that features an animated Logan Paul running through a Japanese “suicide forest” collecting as many “likes” and “views” as he possibly can is now called The Maverick: Forest Run. It’s still satirizing Paul’s controversial “suicide forest” YouTube video, which filmed an apparently dead person. The video got Paul kicked out of the Google Preferred program and led to international controversy and scorn.

The video game is a commentary on a YouTuber’s desires to do almost anything to increase their subscriber numbers—with Paul as the ultimate example.

“The game is basically the same with a different name, yes,” the developer, who calls himself Simo Mediator, told the Daily Dot in an email on Wednesday. “I published the game because I got so many emails asking for a republish and asking for improvements. I also re-uploaded the same game to grow an audience for the next big update.”

Updates that he said will include longer levels with more details, more ability to control the Logan Paul character, some “hidden stuff,” and weapons the maverick can use. And that’s not all.

“I will include two other YouTubers that are known to be Logan Paul’s rivals in the update as enemies,” Simo Mediator said. “Most of the game updates will be inspired from the real life of Logan Paul.”

Apparently, it will have more to offer than what’s been shown on YouTube as gamers engaged with the original app.

Simo Mediator said the old title, featuring the word “suicide,” was too controversial for Google, which also gave him a strike on his Google Play developer account. Google did not respond to a Daily Dot request for comment.

This is what the page for The Maverick: Forest Run app looks like in the Google Play store. See if you can spot the difference from the first version. 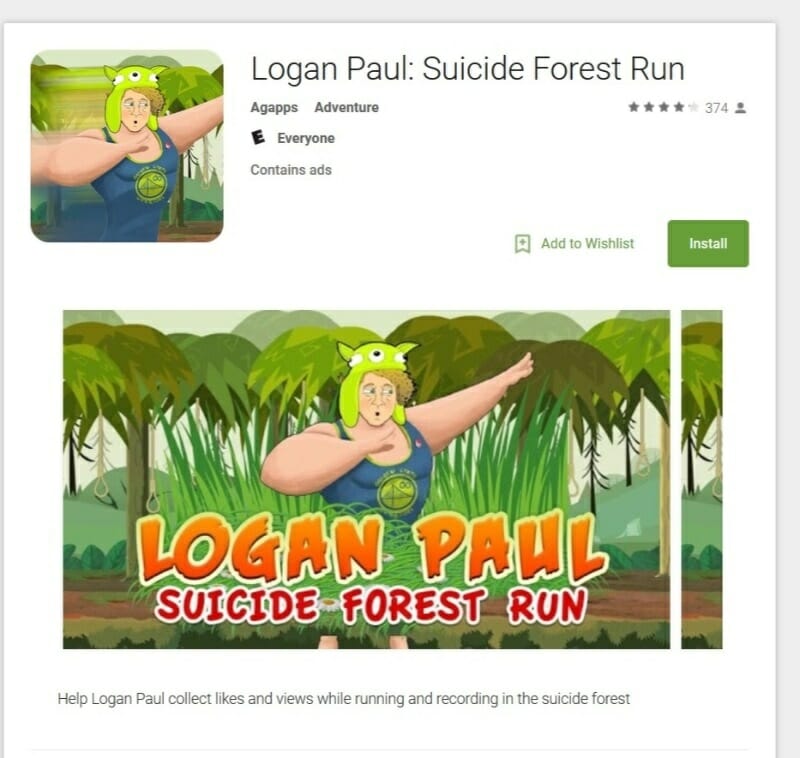 Not much difference after all. Simo Mediator said he was shocked at the number of positive reviews (he said it was more than 700) and installs (more than 30,000) the first version of the game accumulated. Simo Mediator might have been the first to satirize Paul for Android users, but since then, others have come forward with their own versions of a “suicide forest” game.

That game Logan Paul in the Suicide Forest also was quickly pulled off Xbox Marketplace and Android this week. Why was this game deleted? Well, consider the description: “Playing as Logan Paul, you are going to explore the suicide forest searching for bodies in order to get millions of views for your YouTube channel. The forest is full of dangers, so you gotta be careful, otherwise, you may become one of the bodies you came to film.”

That game’s creator said the biggest struggle for an independent developer is to get their game noticed by the public. Simo Mediator’s first attempt certainly did that. But it came at a cost.

“I was blown away by the amount of installs but I knew right away that I [would] have problems with Google,” Simo Mediator said. “But I never thought I’d get a suspend and strike on my account … Yes, it was really disappointing for me, but the next update will be insane.”