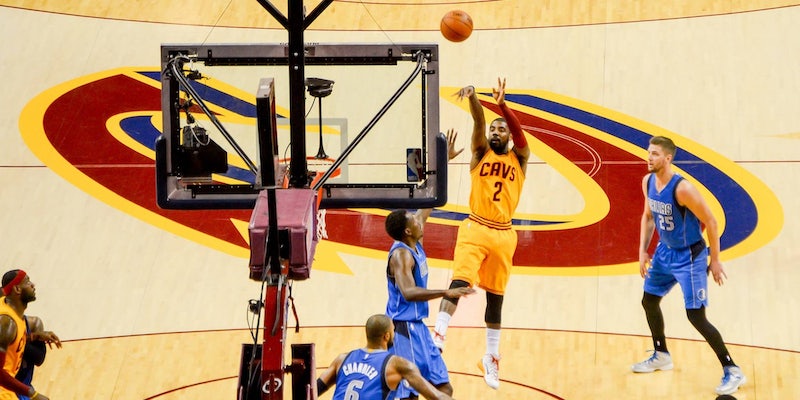 Kyrie Irving says the earth is flat, and the internet has no idea whether to believe him

Yet, he still plays with a round basketball.

The NBA All-Star Game will be played Sunday, but amid all the hype surrounding it, Kyrie Irving has found a way to dish out a little conspiracy theory. And nobody knows whether to believe him.

During a recent podcast interview with a couple of his teammates, the Cleveland Cavaliers guard let slip that he thinks the earth is flat. As SB Nation wrote, “He goes on to call out ‘particular groups’ that ‘provide education’ that allows the masses to accept this as fact. The only thing is that Irving doesn’t really expand on who are these particular groups adamantly indoctrinating adults and children everywhere.”

But does Irvin truly believe (along with apparently hundreds of others) that the earth is not round? Is he really going to get in the same camp as rapper B.o.B ? Is he really all about that 15th century mindset?

Kyrie Irving was trending on Twitter today because he believes the Earth is flat. I asked him about it. pic.twitter.com/ODe9aP9qmK

It’s hard to tell if Irving is serious, considering he’s laughing for part of his interview. And this aside about dinosaurs also seems like he’s playing a joke.

Kyrie Irving not only believes the Earth is flat but that the jury is still out on what dinosaurs actually looked like. pic.twitter.com/0lkra9gPE3

So, what are we to make of this? Is Irving feeding into the media’s obsession with this apparent post-fact world in which we’re living? Is he trying to get us to think critically about an issue, even though this particular debate has been settled for hundreds of years? Nobody seems to know for sure. But the internet certainly has enjoyed discussing it.

Now I think Kyrie Irving has even sicker handles because this whole time he's been dribbling a flat ball.

famous people can pretend like they have "facts" other people missed? Also how we in media overreact to an obvious lie

Either way, Nuggets forward Wilson Chandler is on board with Irving’s way of thinking.

So, what do we do now? Luckily, the answer is obvious. Now, we must wait for Neil Degrasse Tyson to respond. He might be our only hope.