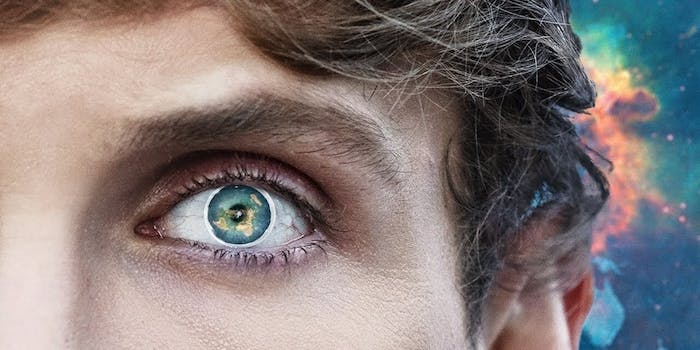 He's probably no more of a flat Earther than a rapper.

For reasons we cannot comprehend, Logan Paul is releasing a documentary that explores the flat Earth theory and those who believe in it. Paul apparently wants to tease viewers into thinking he believes the Earth is flat, too.

A new trailer posted to the Logan Paul Vlogs channel on Sunday offers a lengthy look at his upcoming documentary The Flat Earth: To the Edge and Back, where Paul attempts to infiltrate a close-knit group of flat Earthers.

“We joined their movement and picked their brains about why they think the earth is flat,” Paul says in the clip. “Then, we came to conclusions of our own, which you’ll see in the documentary.”

The trailer appears to hint that Paul, too, may have “come out of the Flat Earth closet,” as he cheekily announces onstage at the Flat Earth International Conference in Denver, Colorado. In an “emotional” scene where Paul is parsing his feelings with a friend, he acts as though his whole world has been flipped upside down as a result of getting to know the people he’s been investigating.

“It’s tough, because you’ve been told something your whole life and you believe a certain way, right?” Paul says. “I just don’t know what to believe anymore.”

The trailer looks like little more than an extended skit. From the way it’s filmed, Paul’s facial expressions, and the questions he asks the convention attendees, it looks like all part of a lengthy joke. Paul likely isn’t any more of a flat Earther than a good lyricist.

The trailer also shows Paul picking a young boy’s brain about his Earth opinions in a kindergarten setting.

“What shape is the Earth?” Paul asks.

“Flat, I think that the Earth’s flat, because if it wasn’t flat, then we would all be falling off of it,” the boy says. Paul gives the camera a quizzical, yet knowing look. Go ahead and give him an award for the excellent Adult Swim-style comedy right now.

Notably, the Flat Earth Society wants nothing to do with the YouTube star, even after his “admission” that he’s one of them.

This announcement came as a surprise to most, given a complete lack of Logan's prior interest in the subject, and the nature of the content he usually produces. Understandably, this has raised a number of questions from the general public, and we have been approached to comment.

As of the time of publishing this statement, TFES has not been in contact with Logan Paul, and we have no intention of offering him membership or otherwise affiliating with him. Claims that Logan Paul is a member of TFES or that he may be considered for membership are untrue.

“This announcement came as a surprise to most, given a complete lack of Logan’s prior interest in the subject, and the nature of the content he usually produces,” the Flat Earth Society tweeted.

“Claims that Logan Paul is a member of TFES or that he may have been considered for membership are simply untrue,” the organization asserted. And while the Flat Earth Society is part of a different group than those who attended the conference where Paul made his “confession,” it’s not hard to believe that this nonsense is indeed just another of the YouTuber’s stunts.

“The truth will set you free” is a maxim repeated throughout the video. We’ll get to see “the truth,” of Paul’s flat Earthism when the documentary drops on March 20, 2019.