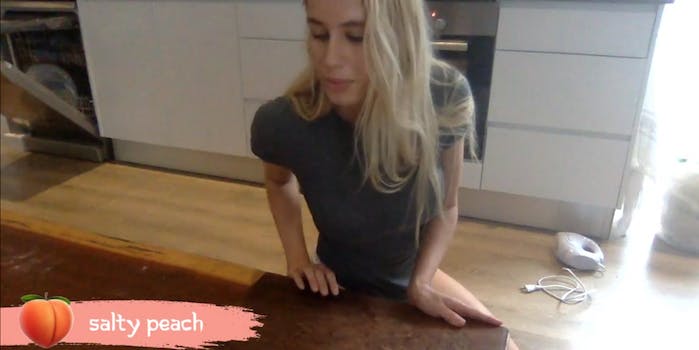 Was this really NSFW?

A Twitch streamer who goes by sweetsaltypeach was banned after streaming herself baking in see-through shorts.

The streamer received an almost immediate ban following the video. A user managed to snag a clip before the stream disappeared. In it, sweetsaltypeach can be seen sitting on the ground near the camera before turning to check her baked goods.

Her white shorts reveal her underwear, particularly from the compromising angle the video is taken at. Through the majority of the short clip, all that can be seen of sweetsaltypeach is from the hips down.

The stream feels fairly benign, particularly considering some of the content on Twitch.

Twitch male gamers have long complained that female streamers are given preferential treatment, which this apparently contradicts. The majority of Twitch users are men, many of whom do not like to share space with women they don’t see as part of their community. This has lead to many unwarranted and sexist complaints about female streamers.

There are plenty of female steamers who use sexuality to their advantage. Streamers like STPeach use tight clothes and physical appeal to garner more views, which is not discouraged by Twitch, so long as they follow the rules.

It is unclear if saltysweetpeach broke any other rules. A ban for shorts seems a bit harsh, considering some of the things other streamers have gotten away with. Streamer Pokimane, for instance, has been caught using a racial slur in at least one video. Another streamer received only a short ban following a video in which he reportedly hit his wife on-stream.

It is not clear when—or if—the ban on sweetsaltypeach will be lifted. We’ve reached out to Twitch.