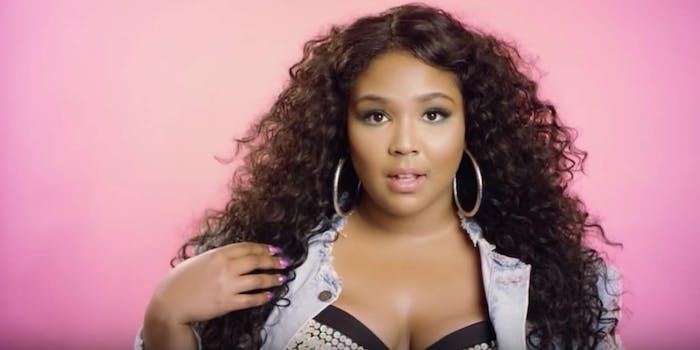 Lizzo sued by Postmates runner she accused of stealing her food

The woman says she received 'direct threats of violence' after Lizzo posted her name and photo on Twitter.

Lizzo is being sued by a former Postmates driver after accusing the woman of stealing her food and posting her picture on Twitter in September.

According to official court documents, the “Truth Hurts” singer stands accused of libel, intentional infliction of emotional distress, and false light invasion of privacy after costing the driver, Tiffany Wells, her job. After not receiving her food order, Lizzo, whose real name is Melissa Jefferson, shared a picture of Wells with her millions of followers, along with a tweet insinuating the driver stole her food. 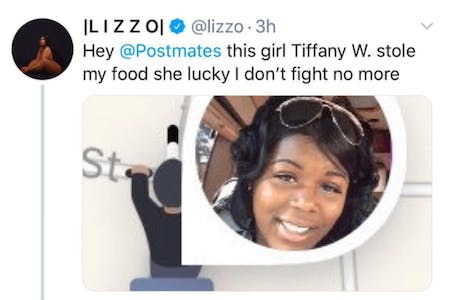 As a result, Wells says that she was unable to keep working for the delivery service and was even the target of abuse by Lizzo’s fans. The suit says that the 27-year-old driver was on the receiving end of “direct threats of violence” and “feared for her physical safety.”

After being called a snitch and irresponsible for sharing the driver’s photo and name, Lizzo expressed remorse on Twitter.

“I apologize for putting that girl on blast. I understand I have a large following and that there were so many variables that could’ve put her in danger. Imma really be more responsible with my use of social media and check my petty and my pride at the door,” Lizzo wrote at the time.

I apologize for putting that girl on blast. I understand I have a large following and that there were so many variables that could’ve put her in danger. Imma really be more responsible with my use of social media and check my petty and my pride at the door. 🥺

According to the lawsuit, Wells made it to the Revere Hotel in Boston, Massachusetts, where Lizzo was staying but did not have her room number. After asking the lobby whether or not a “Bonnie V.” (presumably the name under which Lizzo made the order) was a guest, the delivery driver was told no one by that name had checked in.

In order for Wells’ suit to hold up in court, it has to be proven that Lizzo intentionally caused her harm, and the court documents claim precisely that. The suit argues that the singer acted “negligently” and “with malice,” knowing her tweet would gain traction and result in negative ramifications for Wells.

It also adds Lizzo “knew or should have known that her false and defamatory statements would be republished over and over by third parties.”