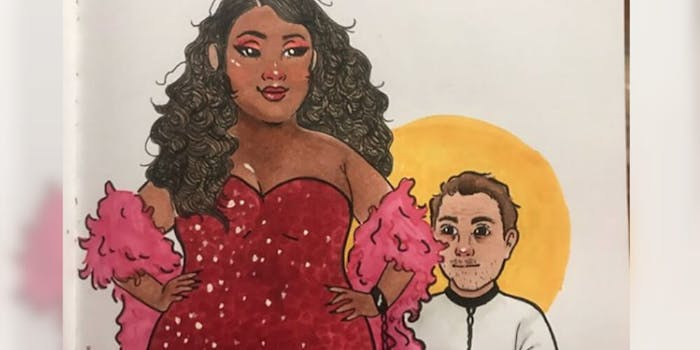 Muniz even briefly made the artwork his Twitter avatar.

In case you don’t know: Frankie Muniz tweeted that he wanted to be Lizzo’s purse, and the internet was all for it.

“I was inspired to make this because I saw the tweet a couple of days ago and thought it might be fun to draw,” Strawberry told the Daily Dot, “I thought maybe at most 30 of my friends would enjoy it.”

Strawberry never expected Muniz would share it with all of his followers and give her a shoutout.

“New profile pic of @lizzo and me. Credit to Strawberry_cherub on Instagram,” Muniz tweeted, along with the illustration.

New profile pic of @lizzo and me. Credit to Strawberry_cherub on Instagram. pic.twitter.com/LAsa6U4Vzl

In the drawing, Lizzo is wearing a glamorous red gown and boa. Her bracelet is a black chain that is linked to Muniz’s neck. Muniz is on his knees carrying what appears to be an actual purse in his hands. Muniz seems to be anxiously awaiting his next set of instructions from his cool and collected dom.

“(Lizzo using Frankie Muniz as a purse) This is genuinely the best thing I’ve ever drawn and I’ll never be able to top this. You’re welcome @frankiemuniz4,” Strawberry wrote, along with the image on Instagram.

See Muniz, in the world of social media, all dreams can come true.