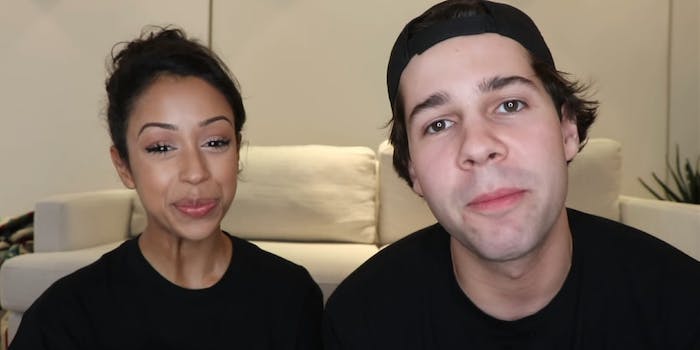 YouTubers Liza Koshy and David Dobrik have announced that they’ve broken up in the most appropriate way: on YouTube.

In a video posted Monday to Dobrik’s channel, the former couple explains that they’ve been broken up for six months and that it wasn’t “healthy” for them to be together right now, but that they’re still friends. The two still cracked jokes through tears.

This news left a lot of fans heartbroken, and fellow YouTubers tweeted out their support.

sending so much love to david and liza. breaking up is fucking awful but having to do it on youtube makes it even harder. please everyone send them love. ❤️❤️❤️❤️

therapist: so what brings you in today
me, a mess: David and Liza broke up pic.twitter.com/hptCfDFfo4

love is real, that’s what i saw in david’s video. don’t draw the wrong message from it
xoxo somebody pass me the mayo

The news also left some people who aren’t deeply embedded in YouTube with a bigger question: Who?

who are these people https://t.co/ehe3ClaW1B

The video has picked up more than 3 million views since Monday.