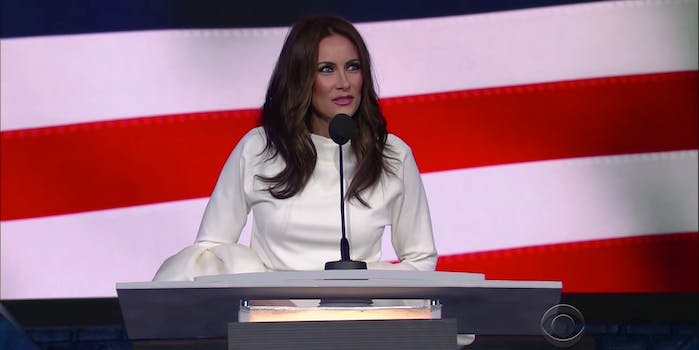 It's a memorable speech all right.

Republican officials and staffers in the Trump campaign shifted the blame onto pretty much everyone else, despite reports that the first draft of Melania’s speech did not include excerpts from Obama’s speech. In the past day, people blamed everything from Trump’s staff to Hillary Clinton to John Legend, Kid Rock, and My Little Pony (yes, really). Donald Trump may never apologize, but now Melania is on The Late Show—thanks to a rather spot-on impression from actress Laura Benanti, who looks very similar to Trump—to make things right.

Only, instead of offering her own words she took a leaf out of #FamousMelaniaTrumpQuotes. With F.H. Buckley recycling his own words for Donald Trump Jr.’s primetime RNC speech Tuesday night, it’s basically the cherry on top.