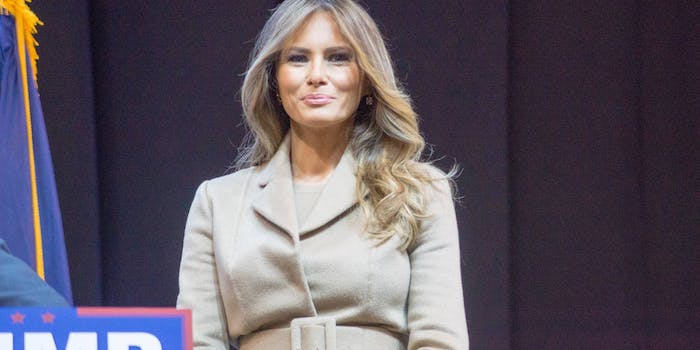 On Monday night, Melania Trump took the stage at the Republican National Convention to deliver her speech, which almost immediately drew accusations of plagiarism.

Critics pointed out how similar her speech—designed to warm up and humanize her husband, presumptive Republican nominee Donald Trump—sounded to First Lady Michelle Obama’s 2008 Democratic National Convention speech, given just prior Barack Obama receiving his presidential nomination. Some noted she lifted entire paragraphs from Obama’s address.

While Trump told Today’s Matt Lauer that his wife “wrote it with as little help as possible,” people online aren’t buying it. Instead, they’re offering a glimpse into Melania’s future speech-writing with #FamousMelaniaTrumpQuotes.

The range of quotes vary, but the hashtag basically comes down to a question of what other famous quotes the possible First Lady could plagiarize.

"It wasn't easy growing up a black woman in Chicago, but I believe the world is safer for my 2 girls, Sasha & Malia" pic.twitter.com/a8GOaVgMwv

"I am a woman, phenomenally. Phenomenal woman, that's me." #FamousMelaniaTrumpQuotes

"Be the change you want to see in the World" – #FamousMelaniaTrumpQuotes pic.twitter.com/cJJqJ9diTy

LOL I can't believe I remembered this movie, but it fits so well. #FamousMelaniaTrumpQuotes pic.twitter.com/TU228bCXZs

"Of course, you don't have to take MY word for it…" #FamousMelaniaTrumpQuotes pic.twitter.com/JDlIWK3BPp

Jokes aside, some people used #FamousMelaniaTrumpQuotes to make a much larger point of Melania plagiarizing Obama’s words.

There's a cosmic irony/horror to Melania Trump's speech about working hard being stolen from a woman of color.

I mean, when you think about it, what's more American than a white person stealing a black person's work?#FamousMelaniaTrumpQuotes

And some pointed out that Melania’s inclination to plagiarize says more about the Trumps in general than anything else.

It isn't simply that she took Michelle's words and use them in a speech about her husband. It's that she had so little to say abt her own.

Two of Donald Trump’s children will speak at the RNC Tuesday night, and given Melania’s speech on Monday, theirs will likely be under even greater scrutiny.