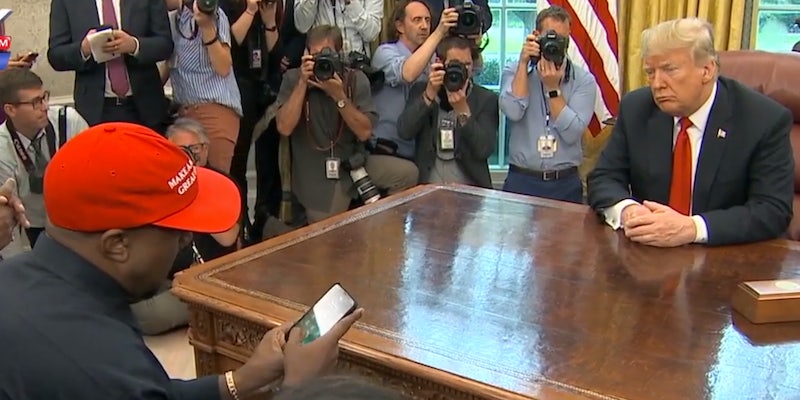 He was just trying to show Trump the plane he made for him.

It was a big day at the White House. Kid Rock was there trying out his new goth Steely Dan look. And Kanye West was there in a MAGA hat to reveal a whole lot of zeros.

During an Oval Office visit with Trump, West unlocked his iPhone on live TV in order to show the President of the United States a GIF of a hydrogen-powered plane, and he revealed his passcode to the media in the process.

Kanye just unlocked his iPhone before the TV cameras in the Oval Office. And his password is just 0 repeatedly pic.twitter.com/mOAbhRLr7s

No one man should have all those zeroes. https://t.co/DomrRsuwFb

As Motherboard pointed out, this is a terrible passcode and West’s phone appears to be an iPhone X, which means he could use Face ID or even Touch ID. But this actually wasn’t the weirdest thing to come out of West’s meeting with Trump. The talk veered from how a lack of “male energy” in his life prevented him from supporting Hillary Clinton to how putting on a MAGA hat made him feel like “Superman” to his blueprint for something called the “iPlane 1,” the hydrogen-powered plane he believes Trump should fly in.