We can guess what this is all about.

Kanye West is having a rough couple weeks, and on Saturday, the infamous rapper deleted his Twitter and Instagram accounts, following a string of incidents where the artist continually aligned himself with President Donald Trump and the modern conservative movement.

First, he faked out fans by promising a new album, only to delay it until mid-November. Then, after a performance on Saturday Night Live last week, he posted a selfie of himself wearing a Make America Great Again hat and suggested we should abolish the 13th Amendment of the U.S. Constitution. You know, the one that bans slavery, which West has previously insisted was a personal choice by Africans.

The deletion of West’s social media accounts would seem to be in response to the absolute shellacking he experienced as a result of his poorly choreographed political outbursts. Singer Lana Del Rey herself jumped into West’s Instagram comments section to drag the rapper.

“Trump becoming our president was a loss for our country, but your support of him is a loss for the culture,” Del Rey wrote. 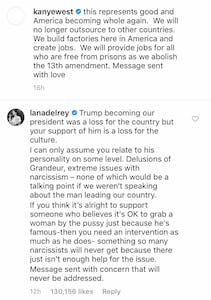 West later attempted to clarify that his post was referencing the loophole in the 13th amendment that allows for slavery or servitude to serve as a punishment for a crime, which is the subject of much criminal justice reform activism in the black community.

West is currently off to Africa to finish recording his upcoming album, ‘Yandhi,” which Kim Kardashian said releases Nov. 23, although it’s no safe bet. Odds are the absence from social media won’t last too long. He’s done this before, and he’ll probably do it again, but there’s no telling what may come out of his mouth next time.