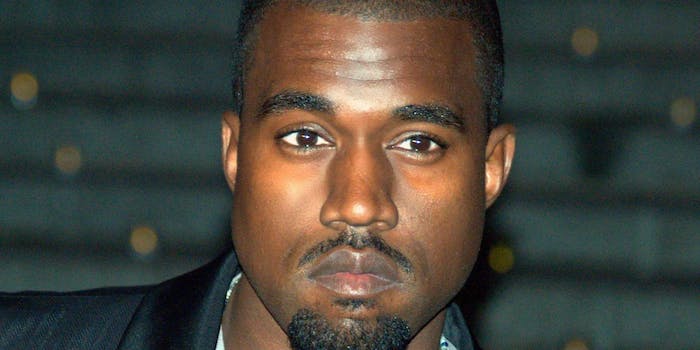 Could there be more fancy shoes on the way?

To quote Mr. West himself, “Sandals with socks. Keep it gangster.”

Kanye West is the lavish designer that keeps on giving. The man who invented the leather jogging pant and put $120 price tag on a white “Hip Hop t-shirt” you could find in a Hanes three-pack at Target, has now gifted us with the most opulent sandals on the planet. With the gold leaf straps, they look like they could have descended down from the ceilings of Versailles, where KimYe celebrated their wedding rehearsal dinner. (And if you ask me, it’s a missed opportunity that she didn’t wear them for the occasion.) Ye’s barber and creative consultant, Ibn Jasper, Instagrammed the one-percent shoes over the weekend, fittingly placed on a pedestal, and tagged the photo “YEEZi x Giuseppe Cruel Summer flats.”

Kanye and Giuseppe Zanotti have teamed up before–first on a pair of $5,900 beaded white sandals that provided the footwear for his debut fashion show, then on a “Cruel Summer” collection that played off the album’s artwork–however this collaboration is entirely new. The gold leaf sandals might have been leftover from the “Cruel Summer” collection and are just seeing their release now but, last week in an interview with Diario de IBIZA, Zanotti said that “other creations like Kanye West are on the market next season” via Google translate.

If you’re in the market for some new gold sandals, you can cop the shoes for a cool $1,695 at Giuseppe Zanotti’s website.

All Marissa wants is dopeness. She’s on Twitter @marissagmuller.

Photo via david_shankbone/Flickr (CC BY 2.0)