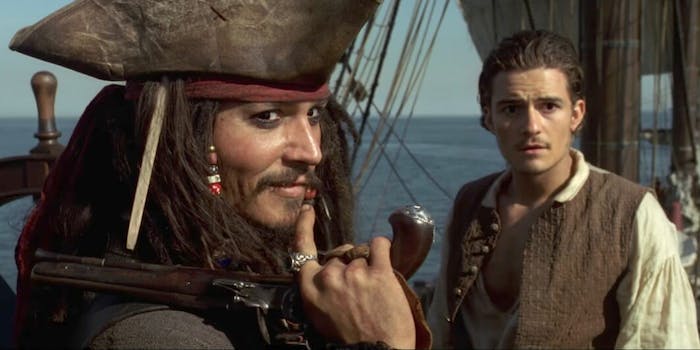 Riders were thrilled to see him.

Pirates of the Caribbean showed the unlikely success of making an entire franchise based off of a theme park ride, and one of its stars came full circle to replace his animatronic character for some riders at Disneyland.

Whether for the first time or the 100th time, those who went on the Pirates of the Caribbean ride might’ve expected some animatronic characters to speak at them during the ride. Some might’ve even expected to see Captain Jack Sparrow, the pirate Johnny Depp made famous throughout the films. What they didn’t expect to see was Depp himself, who temporarily stepped in to take over for his character.

“Everyone was surprised, shocked, and excited to see him,” someone who saw Depp on the ride told E! News. “He acted exactly like his character in the movies.”

He later stepped out on the balcony of the Pirates of the Caribbean ride to greet the fans who gathered outside to see him.

With Pirates of the Caribbean: Dead Men Tell No Tales set to be released in just a few short weeks, promotion for the film will likely ramp up. And that means seeing plenty of Depp, who’s long been the face of the franchise. We might even see him as Jack Sparrow a bunch; he has dressed up as the character outside of the film before. And while virality has long been part of the promotion game, some might take his turn in the Pirates of the Caribbean ride as an attempt to rehabilitate his image after domestic abuse allegations—something that, for some actors, doesn’t take much.

Some people have vowed to not see any of his films, but for others it might just take him asking them where the rum has gone.