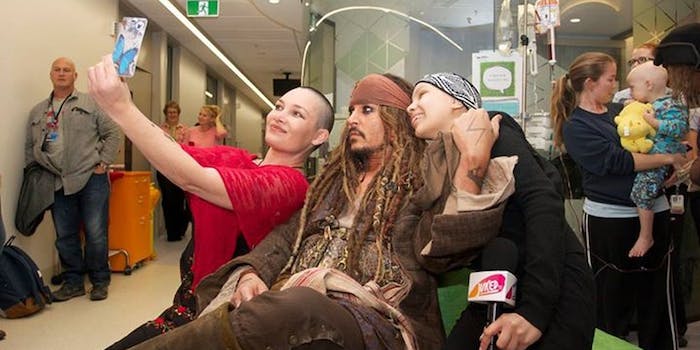 They were ecstatic to see him.

The jury’s still out on whether the fifth Pirates of the Caribbean movie is a good idea or just a senseless ploy for money, but there’s at least one good thing to come out of it.

Johnny Depp, who visited children’s hospitals dressed as Captain Jack Sparrow long before the Marvel superheroes warmed our hearts with their visits, made an appearance at Lady Cilento Children’s Hospital in Brisbane, Australia, Tuesday night as the swarthy character.

He’s currently in Australia filming Pirates of the Caribbean: Dead Men Tell No Tales, and he arrived in-character with actor Stephen Graham, who plays Scrum in the films,. They flew in from the Gold Coast by helicopter just for the occasion.

The nonprofit Children’s Hospital Foundation set up the meeting with Depp and Graham, who took photos with patients thrilled that they came to visit.

We presume that Jack Sparrow went back to doing what he does best after the hospital visit, which is being a pirate. And probably drinking rum, for good measure.