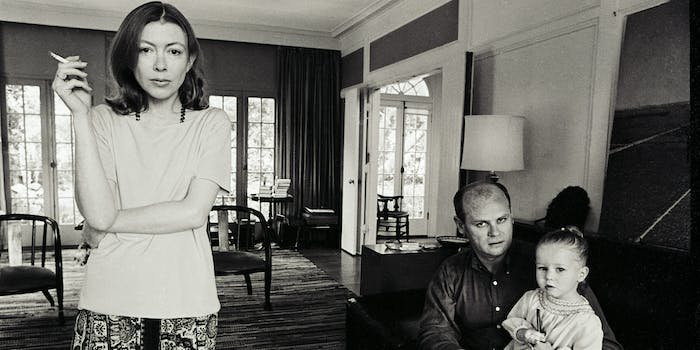 ‘Joan Didion: The Center Will Not Hold’ is a family affair—for better or worse

Griffin Dunne helms a Netflix doc about the great writer, who's also his aunt.

Joan Didion has always been fairly inscrutable. In her writing there is a quiet voyeurism: sunglasses on, straight face. She is a reporter in the truest sense, and when you read her words you see the picture she’s painting, but you also wonder what the artist is thinking.

Does new doc Joan Didion: The Center Will Not Hold illuminate her at all? If you’re intimate with her work, not so much. If you’re a stranger, it’s a reasonable introduction.

Griffin Dunne—actor, director, and Didion’s nephew—directs the doc, which was funded in part on Kickstarter, and having a family member at the helm certainly offers better access. He goes chronologically, detailing Didion’s early formative years in Sacramento, California, and first job at Vogue, and there are voiceovers of Didion reading portions of her work, but the meat here is Dunne’s interviews with “aunt Joan.” He recounts meeting her as a 5-year-old, and Didion’s husband John Gregory Dunne telling Griffin his testicle was hanging out of his bathing suit. While everyone else was cracking up, Didion kept a straight face.

The doc gets more interesting when it explores Didion’s reporting on Southern California counterculture in the late ‘60s. Her 1967 essay “Slouching Towards Bethlehem” famously opens with a statement on the time: “The center was not holding.” In that trademark bluntness, there was some foreshadowing.

We glean a bit of insight into her reporter life. Dunne asks her about a scene late in the essay, in which she observes a 5-year-old girl tripping on acid. After a pause she’s candid: “Let me tell you, it was gold. That’s the long and the short of it. You live for moments like that if you’re doing a piece. Good or bad.” A writer friend says Didion excels in documenting the “horror of disorder,” which is a nice segue into her reporting on the Manson family and murder of Sharon Tate. She speaks of how she cooked dinner for former Manson family member Linda Kasabian and her child, which was “weirdly normal and yet it was not normal in any way at all.”

While the doc lays out her work, it gets a bit cagier when exploring her relationship with husband Dunne and adopted daughter Quintana Roo. In 2015 biographer Tracy Daugherty attempted to unravel the more intimate details in The Last Love Song. Here Didion hints at her daughter’s alcoholism (as does a childhood friend) and her husband’s temper, but that’s as deep as it goes. Didion opens up more when speaking of Dunne’s 2003 death, which was tragically followed by Quintana’s in 2005, though she already wrote about this great loss in memoir The Year of Magical Thinking and follow-up Blue Nights.

In any portrait of an artist, you ideally want to leave with something that feels raw or sacred. By the end of The Center Will Not Hold, one doesn’t necessarily feel like they know Didion any better, or that she’s loosened her grip on her public image. And though Didion veered into political writing later in her career, there’s also no real opinion on the current landscape. Dunne doesn’t ask too many hard questions; instead the doc soars on its moments of banter, like when the two have a conversation about snakes that becomes oddly philosophical.