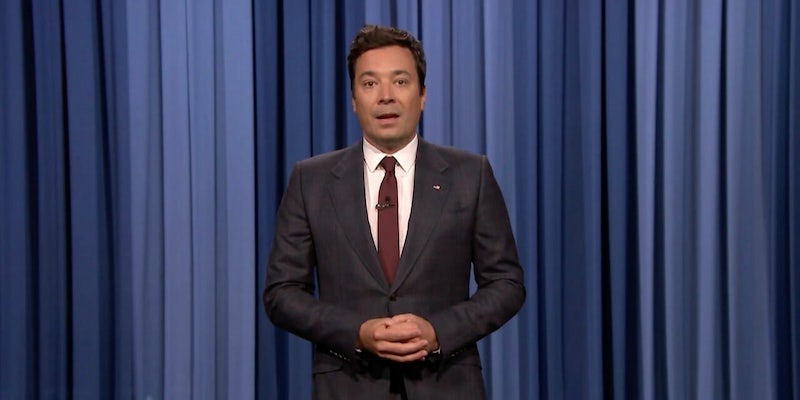 Jimmy Fallon on Charlottesville: ‘Ignoring it is just as bad as supporting it’

Fallon kicked off Monday’s 'Tonight Show' with a powerful monologue.

Jimmy Fallon kicked off Monday’s Tonight Show by addressing the events in Charlottesville, Virginia over the weekend, and although his show isn’t political by nature, Fallon said he felt it was his responsibility to speak up against the hateful and racist rhetoric he saw on the news.

Like mostly everyone else, Fallon was horrified and disgusted by the sight of neo-Nazis and white supremacists who took to the streets of Charlottesville. Some of them violently assaulted counterprotestors, and one white supremacist allegedly drove his car into a group of counterprotestors and reversed it, resulting in the death of Heather Heyer and injuring at least 19 others. While President Donald Trump initially decreed that there was hatred “on many sides” in Charlottesville, it took him two days to denounce hate groups after near-universal criticism that he didn’t do enough to denounce Nazis and white supremacy.

With his emotions on the surface, Fallon wondered after watching what had happened in Charlottesville how he would explain to his daughters—ages 2 and 4—how so much hatred existed in the world.

“As kids grow up, they need people to look up to, to show them what’s right and good,” Fallon said. “They need parents and teachers, and they need leaders who appeal to the best in us. The fact that it took the president two days to come out and clearly denounce racists and white supremacists is shameful. And I think he finally spoke out because people everywhere stood up and said something. It’s important for everyone—especially white people in this country—to speak out against this. Ignoring it is just as bad as supporting it.”

Fallon has been on the receiving end of backlash from critics for what they perceived as his role in normalizing Trump ever since his Trump interview aired nearly a year ago. And while Fallon’s statement against white supremacy might not change some of their minds, he’s likely speaking to members of his audience that other late-night hosts can’t reach.

He praised the people who have been on the right side of history and called for everyone to do what is right in the face of the kind of terror that’s now openly operating in the U.S.

“We all need to stand against what is wrong, acknowledge that racism exists, and stand up for all that is right, and civil, and kind,” he said. “And to show the next generation that we haven’t forgotten how hard people have fought for human rights. We cannot do this. We can’t go back. We can’t go backward.”