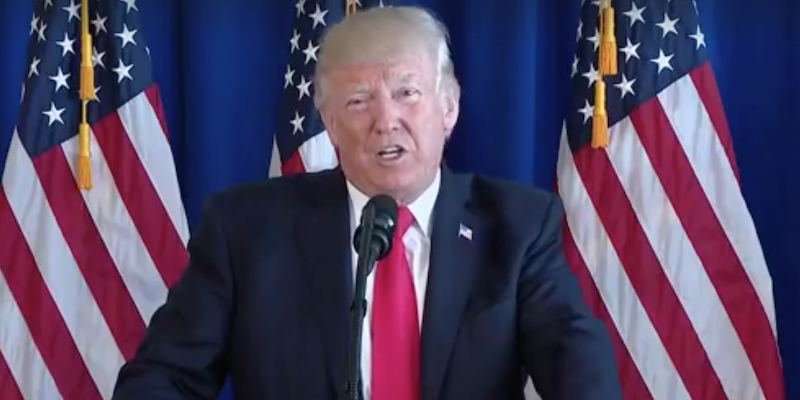 President Trump delivers remarks on Charlottesville protest, says hatred is ‘on many sides’

The president did not specifically address the Unite the Right movement in his remarks.

During the scheduled signing of his Veteran’s Affairs employment act, President Donald Trump took a few moments to address the events unfolding in Charlottesville, Virginia—and one particular phrase he used is stirring controversy.

On Friday, white supremacists staged a torch-lit march and rally on the University of Virginia campus. Saturday morning, the alt-right and white supremacist rally, “Unite the Right,” was shut down after local and state officials declared the city in a state of emergency. Hours later, a car plowed through a crowd of counter protesters. At least one person has died and 19 are injured.

While Trump was late to comment on the white supremacist-led rally via Twitter, he chalked up his delay to his work on Veteran’s Affairs legislation in Bedminster, New Jersey. However, the remarks he ended up delivering didn’t appease his critics.

“We condemn in the strongest possible terms this egregious display of hatred, bigotry, and violence on many sides, on many sides. It’s been going on for a long time in our country, not Donald Trump, not Barack Obama. It’s been going on for a long, long time,” Trump said. “It has no place in America. What is vital now is the swift restoration of law and order, and the protection of innocent lives. No citizen should ever fear for their safety and security in our society, and no child should ever be afraid to go outside and play or be with their parents and have a good time.”

Trump then proceeded to say he had just spoken on the phone with Virginia Gov. Terry McAuliffe, and that the U.S. has seen record employment. He also thanked the local and state police in Charlottesville.

Despite the “Unite the Right” rally’s roots in white supremacy, Trump failed to allude to any part of the movement in his remarks, as well as the car collision. As many were quick to note, he instead condemned hatred and bigotry “on many sides.” The line struck a nerve with the internet, which then fixated upon Trump’s empty denouncement of Nazism and white supremacy. While there clashes between those attending the rally and counterprotesters, with bottles being thrown and chemical irritants being used, critics took issue with Trump’s conflation of counterprotesters with white hate groups.

Did Trump really say that he condemns the violence on "many sides"? The white folks with tiki torches brought the violence, own it.

We should impeach this president on many sides.

by condemning hatred "on many sides," the president of the United States just handed an immensely valuable gift to David Duke

When terrorists abroad plow cars into crowds Trump condemns "radical Islam." But when it happens here, he talks of violence "on many sides."

The violence, chaos, and apparent loss of life in Charlottesville is not the fault of "many sides." It is racists and white supremacists.

Both former Klu Klux Klan leader David Duke and alt-right leader Richard Spencer have picked up on Trump’s previously tweeted non-condemnations, asserting that he’s taking issue with counterprotesters and the far-left Antifa groups instead of the white Americans that voted him into power.

I would recommend you take a good look in the mirror & remember it was White Americans who put you in the presidency, not radical leftists. https://t.co/Rkfs7O2Ykr

Asked by a reporter at the end of the Veteran’s Affairs press conference if he wanted the support of white nationalists, Trump walked away.