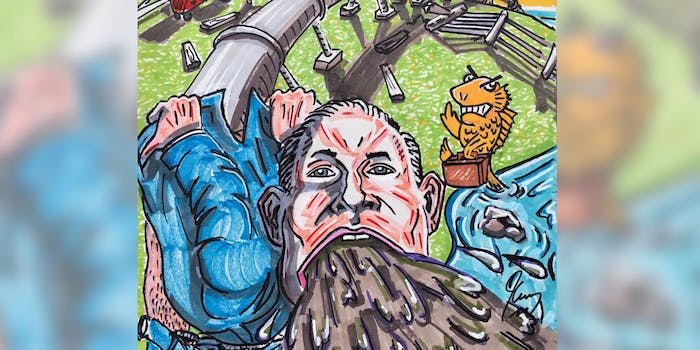 That is quite the pipeline.

Pruitt’s run as head of the EPA has been fraught with investigations and dangerous ideas, but this week it was rumored that he’d be the next person in Trump’s real-life version of The Apprentice to be ousted from the White House after it was discovered the EPA approved a pipeline deal for a Canadian energy company and that Pruitt had cheaply rented a fancy condo linked to the company’s D.C. lobbyists.

Carrey summed it all up.

I looked on Trivago. The cheapest room in Washington is a youth hostel with bunkbeds at $81 a night. The $50 room Scott Pruitt got was a bribe from an energy lobbyist. Need your pipeline approved? Do it through Pruitt! pic.twitter.com/DaSdgvFPmv

It pairs well with the “official” portrait Carrey painted of Trump last week.