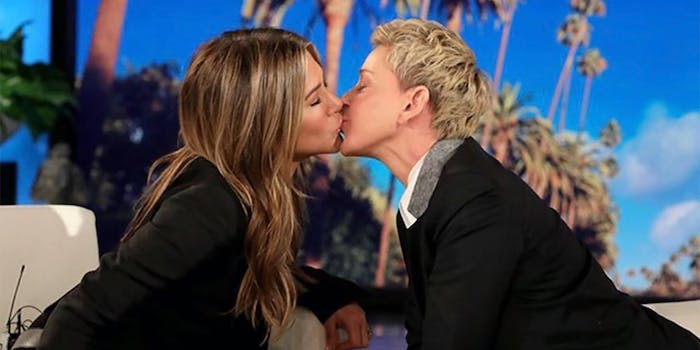 The A-listers smooched and the internet swooned.

All of our favorite ’90s icons are smooching—and they’re breaking the internet while they’re at it.

Jennifer Aniston and Ellen DeGeneres, former titans of the ’90s sitcom scene and enduring A-listers, shared a kiss on Monday when Aniston stopped by Ellen to promote her new AppleTV+ series, The Morning Show.

Find out how this happened. Tomorrow. @jenniferaniston

This celeb spit-swapping was catalyzed by a kiss between DeGeneres and another ’90s icon, shock jock Howard Stern. DeGeneres and Stern kissed when the talk radio mainstay appeared on the show in mid-October.

Aniston peppered DeGeneres with questions about the Stern smooch. “He just asked for the kiss,” Ellen responded coyly. “I don’t normally just grab anyone who asks for a kiss.”

“When was the last time you kissed a guy?” Aniston asked.

“I kiss guys!” DeGeneres responded in mock exasperation. “I don’t make out with guys, but I kiss guys on the lips.” Then DeGeneres turned the tables, asking Aniston, “When was the last time you kissed a girl on the lips?”

“I don’t kiss girls on the lips,” the Friends star responded. That’s when DeGeneres leaned in and the two locked lips.

As soon as the kiss happened, DeGeneres knew they had a viral moment on their hands. “That’s what they wanted to see,” the talk show host remarked. “They’ve been wanting that for years.”

It’s an understatement to say that people were more interested in DeGeneres’ kiss with Aniston than with Stern. Both the image and the video have gone massively viral.

While The Morning Show is getting mixed reviews, clearly this kiss isn’t. As of Tuesday morning, the photo of DeGeneres and Aniston kissing had over 1.7 million likes on Instagram.