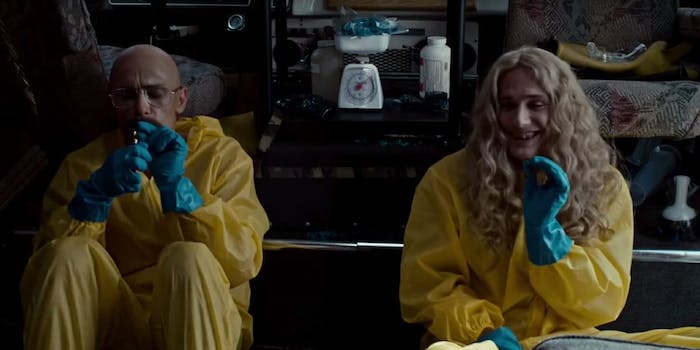 It's probably the best gig he's got.

How did a lowly webseries become the best bet of Hollywood star James Franco?

In the first series of Making a Scene—AOL Originals’ movie mashup webseries—it was impossible to get past just how disinterested the star, James Franco, looked during the planning stages. Propped up by cushions with assistants a frenetic blur around him, the main man couldn’t even be bothered to open his eyes, let alone spin the wheel that determined the two subjects for each episode. It added an extra layer to the collage, everything imprinted with the vibe of Weekend at Bernie’s. The performances were still admittedly great, but here was a man who knew his worth, a guy in demand who was acting like this was all some sort of favor that he was doing instead of churning out another blockbuster—or, equally, making love to a snowshoe filled with his own toenail clippings in the name of art.

But what have you done for us lately, James? Cast an eye over his work in the last year, and since The Interview you’re met with a bunch of stuff that premiered eons ago at random festivals but hasn’t found distribution yet. It is the sort of trend that makes agents very nervous. And while it’s correct that Franco is wont to make odd choices, it seems perverse even for him to choose only stuff that no one would ever see. Even the film that was deemed fit for release was a clanger: True Story transformed a thrillingly unbelievable slice of reality into 99 minutes of Jonah Hill’s puzzled reaction shots and banished the director, Rupert Goold, back to the London theater.

A lot of this has nothing to do with Franco; who’d know that films by Wenders and Herzog would be left on a shelf? But it means that suddenly, maybe, Making a Scene is the best gig that he’s got. It’s a great concept, it’s guaranteed to be seen by a load of people, and most of the work is done for him. And don’t you know it, the boy gets it! There he is—sure, still not spinning the wheel, but baby steps—in the first episode of the second series, back straight, bright-eyed, and ready to go.

This time round, it’s television shows rather than movies, and although we’re all wishing for Boy Meets World v The Golden Girls (Topanga! Blanche!!), fate delivers us Walter White and Carrie Bradshaw, both of whom are played by Franco in Breaking Sex.

And predictably, given the fun of the previous series, it’s smartly done. There are some nice gags over Samantha Jones’ clodding affection of terrible sexual puns, Alicia Silverstone takes time out of her busy schedule, and Franco makes a pretty good teacher turned meth cook who just wants to get Carrie back to his RV. It’s short at just a few minutes—knowledgeable in the fact that there isn’t really anything holding it together other than the goodwill of the audience and the enthusiasm of its creators. But that’s all you really need from something like this, an engaging piece of distraction that reminds you of Franco’s star power and leaves you curious for more.

Unfortunately, unlike the previous series, which dropped half a dozen of episodes at a time, this time AOL seems committed to leaching out episodes weekly, every Wednesday. It’s slightly infuriating, but the possibility of Franco channelling Lorelei Gilmore (!!!) is worth the hassle of regularly checking back alone.