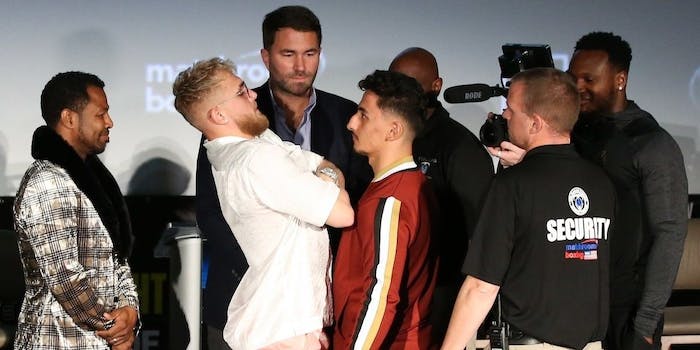 How to stream Jake Paul vs. AnEsonGib

In this YouTube spectacle, can anyone shut Jake Paul's mouth?

How to stream Jake Paul vs AnEsonGib without cable

Out of all the matches on the stacked DAZN boxing card that will stream Thursday from Miami, the Jake Paul vs. AnEsonGib bout will have the least amount of technical boxing skill and will provide long-time fans of the sport the ability to gnash their teeth in protest. But Paul vs. AnEsonGib also might be the reason why the card ultimately succeeds. Though there are three world titles fights that will occur during the event, most of the boxers are unknown by the mainstream.

Paul has nearly 20 million YouTube subscribers. AnEsonGib has about 2 million and healthy social media followings on Twitter and Instagram. They’re established stars for the younger generations. Yes, boxers like Demetrius Andrade, Tevin Farmer, and Daniel Roman are phenomenal fighters. But remember: The KSI vs. Logan Paul YouTube rematch was the fifth-most globally streamed event for DAZN in 2019. And this week, Jake Paul and AnEsonGib have sucked up much of the attention.

“At the end of the day, I respect the sport of boxing,” Paul told the Daily Dot. “It’s an honor to be a part of this. I’m fighting on the card with some amazing people. These are world champions. But we are also bringing a new audience to it and young eyeballs to the sport. It’s a different fan base. Some people might have been upset with KSI vs. Logan, but it drew numbers and boxing is a business.”

Here’s everything you need to know to stream Jake Paul vs. AnEsonGib.

The only legal way to watch Paul vs. Gib (and the main event of middleweight titlist Demetrius Andrade vs. Luke Keller) in the U.S. is on DAZN. Since September 2018, the streaming service has shown some of the most important boxing matches in the sport. DAZN showcased Canelo Alvarez knocking out Sergey Kovalev, and it featured Andy Ruiz upsetting Anthony Joshua for the heavyweight championship in June 2019 and Joshua getting his revenge in December. Gennadiy Golovkin has fought twice on the service since June, and the exciting World Boxing Super Series tournament has been a mainstay. KSI also beat Logan Paul on the streaming service.

DAZN costs $19.99 per month or $99.99 for the entire year, but for fight fans, it’s been a tremendous value. It streams more than 100 fight cards per year—including a large number of MMA cards with Bellator—and you can watch some of the best boxers in the world (like Alvarez, Joshua, and Golovkin) and some of the potential rising stars (like Vergil Ortiz Jr.). DAZN says it’s doing its best to try to kill the longtime boxing PPV model, but another perk of a subscription is getting to watch fighters like Munguia and O’Sullivan on a regular basis—that should get your blood pounding as the fists begin flying.

DAZN works with Roku, Apple TV, Amazon Fire Stick, and Fire TV, Xbox One, PlayStation 4, and both iOS and Android phones. All you need to do is download the DAZN app and log in with your subscription credentials. You can also stream via computer browsers Chrome, Firefox, Safari, Edge, Internet Explorer, and Opera. (Read our full DAZN review here.)

Jake Paul vs. AnEsonGib: Why it matters

Paul hasn’t made it a secret that he really wants to fight KSI, the YouTuber who beat Logan Paul by split decision in November. Jake Paul thinks he needs to be the one to seek redemption for his older brother, and assuming Jake Paul gets by Gib, KSI said he’d be willing to face the younger Paul in the ring.

“I think he has tried to select opponents before and this isn’t what he wanted,” Gib said at a press conference this week. “It’s going to be a rough night for him. I finessed my way into this fight. I have nothing to lose. I want it really fucking bad. He has everything to lose on Thursday.”

Gib has more in-ring experience than Paul, knocking out his roommate and fellow YouTuber MaxPlaysFifa in 2018 and then beating Jay Swingler by decision a few months later. But just like Paul—who stopped YouTuber Deji on the same undercard that saw Gib beat Swingler—Gib will make his pro debut on Thursday. Which means he’ll compete without headgear and with smaller boxing gloves.

While Gib has been connected with trainer Viddal Riley for the past several years, Paul has been coached by International Boxing Hall of Famer Shane Mosley for this bout. And Mosley likes what he sees out of his fighter.

“I won’t train anyone who doesn’t put in 100%,” Mosley said. “He does that every single day. He’s working harder than a lot of professional fighters that I know. He has definitely put the work in. He is strong, he is fast, and he is ready to go. … The toughness shows in sparring. I put him to the test. I didn’t make it easy for him during camp. He has no quit.”

With these kinds of neophyte fighters, it’s hard to figure out who has what it takes to win. As of this writing, though, the oddsmakers like Paul, who is a -195 favorite (which means you’d have to bet $195 to win $100 on a Paul victory).

“On DAZN, my opponent’s 15 minutes of fame turn into 10 seconds of counting stars as he lays unconscious on the canvas,” Paul said when the fight was first announced. “And then, I’m coming for that wanker KSI.”