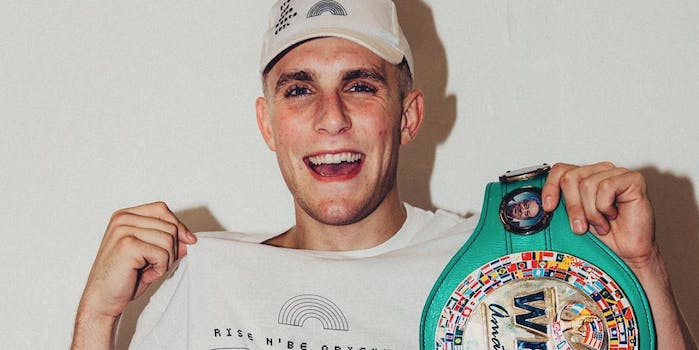 Jake Paul was in Luis Ortiz’s corner during last night’s undercard match, and Twitter can’t figure out why

The Tyson Fury vs. Deontay Wilder fight wasn't the only thing people were talking about Saturday night.

The internet is trying to figure out why Jake Paul was in Luis Ortiz’s corner during his undercard bout against Travis Kauffman at the Tyson Fury vs. Deontay Wilder fight on Saturday.

He walked to the ring with the heavyweight wearing a WBC world title belt around his neck.

Yes, the same one he got when he beat Deji Olatunji in a YouTube boxing event back in August. His maybe-slightly-more-famous brother Logan Paul competed against KSI at the same match.

At first, people were just trying to figure out if it was really him.

#WilderVFury is that @jakepaul in Luis Ortiz's corner??

Did I just see jake Paul in Ortiz’s corner? Wtf is that about 🤢

But then it was confirmed on Twitter and people were amused—but maybe even more confused.

👀 YouTuber Jake Paul has genuinely just entered the ring in Luis Ortiz’s corner wearing the belt he was awarded by the WBC for his YouTube boxing match in August. pic.twitter.com/YQxDUC9MyK

why is jake paul next to Luis Ortiz like he be boxing and putting in work in the ring? pic.twitter.com/9dladfswJY

Why is @jakepaul in the ring? 😂 pic.twitter.com/0Yv6s2N4Pp

And it left others wondering if Paul was considering a boxing career of his own.

Are we going to ignore the fact that Jake Paul is trying to be a heavyweight boxer? #boxing pic.twitter.com/9DbFnQvn1G

Jake Paul boxes once and know he’s all into boxing

Maybe he does want to become a professional boxer—or maybe he just wants to figure out a way to get his mind off his personal life following his very public breakup with fellow YouTuber Erika Costell in early November.

Before Saturday’s match, Paul brought up Ariana Grande’s new single, “Thank U, Next”  on Twitter, admitting he can’t relate to the sentiment.

“Erryone all gassed up by Ariana like, ‘HAHAHAHAHA Thank You, Nextttttt,’” Paul tweeted. “And I’m just like in the corner crying like, ‘Thank you, thank you so much, I love you, please let’s get back together.’”

“Thank you, thank you so much, I love you, please let’s get back together”

On his YouTube series “Jake Paul Uncut” he shared this his relationship with ex Erika Costell was toxic.

“We know how to hurt each other. It’s so sad it got to that point. But it did,” he said. “… Our relationship is so complicated because of the business; the personal [side]; [how] she used to be my assistant,” he explained. “We all have our insecurities. I have trust issues. We got to a point in our relationship where we would just tear each other down. We went into this downward spiral that we couldn’t control.”