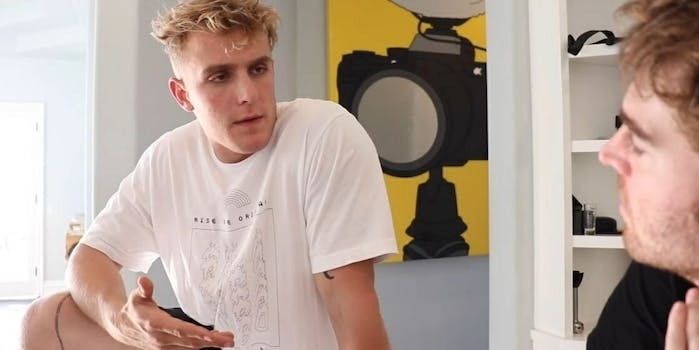 The latest Shane Dawson episode shows the YouTuber isn't as happy as he seems.

Anybody who watches Jake Paul videos on YouTube knows that he’s bombastic and obnoxious. He’s the leader of his own social media incubator group—Team 10—and he seems to be having the time of his life.

But in the latest episode of Shane Dawson’s eight-part YouTube documentary, Paul told a story about his loneliness. And it might make you wonder if some part of him is actually a bit sad.

So far, Dawson’s series has asked the question of whether Paul is a sociopath, and Paul has accused a former Team 10 member of stealing one of the group’s channels (the former member, Chance Sutton, strongly disputed that).

In episode 6, though, Paul tells a story to which many of his users (hell, most of the entire world) can relate. He tells a tale of sitting by himself in a room filled with other people and feeling awkward that nobody would talk to him. This occurred at a YouTube creators summit, and Paul said he was shunned by the rest of the vloggers in attendance.

“I literally sat by myself the whole time,” Paul said. “No one was like, ‘Hey man, I like your videos’ or anything like that. … I’m one of the biggest YouTubers. You would think someone would come up and say, ‘Hey man, nice to meet you.’ There wasn’t that. I was kind of the elephant in the room.”

Dawson also spoke with Paul’s girlfriend, Erika Costell, who revealed that Paul’s father has moved into the Team 10 house. Greg Paul has faced plenty of controversy lately. His email was hacked recently, and the group that did it released four of his alleged sex videos because, as the hackers told the Daily Dot, “We don’t really like him. We don’t like the Pauls.” Greg later denied the accusations that he’d had sex with an underage girl.

Greg was also blamed for why the last iteration of the Team 10 group broke apart last May, as former Chief Operating Officer Nick Crompton said Greg was verbally abusive.

“I know Greg means very well and he does help with a lot,” Costell told Dawson. “But him living here has put a lot of stress on Jake. I know that for a fact. There’s a certain energy. The energy shifts when he walks in the room. It’s not a good situation. I think everybody in the house knows that. It’s not good to have him living here.”

Costell revealed that Jake doesn’t like to be alone and that’s why he surrounds himself with so many friends who live in the same house as him. She also said that the management team Jake shares with his older brother, Logan, favors Logan and makes him the first priority.

It’s certainly an interesting insight into the world of Jake Paul—and one that hasn’t been publicly aired before.

Since this is the YouTube world, it goes without saying that any or all of this could be fake or played up to evoke certain reactions from the audience. But Jake also seems self-aware to how his persona rubs off on other YouTubers or people who aren’t fans, even if it’s framed as a bruised ego.

“There’s definitely a vibe,” he said.