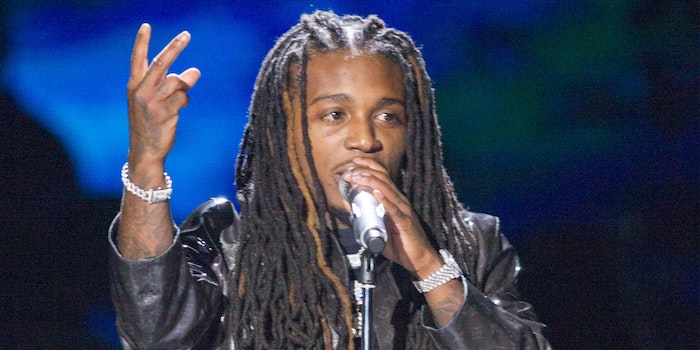 Jacquees, self-proclaimed ‘king of R&B,’ is finally backing up the claim

The singer is doubling down all the way to the top.

The singer caused a stir in the R&B community back in December 2018 when his video claiming he is the new “king of R&B for this generation” went viral on Instagram. R&B icons like Keith Sweat, Chris Brown, and Tank sounded off in response with a different opinion. But it’s become his brand and he seems serious enough to go all-in on the moniker—it’s working.

In Texas, hundreds of teen fans piled into the Aztec Theatre along San Antonio’s historic River Walk anxious to hear Jacquees sing hits like “Come Thru”  and “Round II” from his King Of R&B album that was released late last year. Openers included upcoming rappers FYB (Fresh Young Boyz) and Jacquees protégés and male R&B group, Bluff City. But as fans, critics, celebrities, and R&B lovers regularly ask: Is Jacquees the king of R&B these days or what?

Jacquees fan Kilana Duhart spoke to the Daily Dot at the concert.

“I don’t think he’s the king, I think he has potential, but definitely not the king,” Duhart said, flatly.

But fans like Quinnc Carridine believed Jacquees earned his right to say he is the new king.

“You gotta look back at the history of R&B, he has done just as much work as any other R&B singer… he’s a hard worker and his skills show,” Carridine explained.

As the night went on, Carridine’s sentiment seemed to echo from a fervent crowd. Dressed in a black velvet jumpsuit, the “You” singer belted his smooth yet powerful voice, opening with his King of R&B track “New New.” Despite the viral and meme-worthy title, the 25-year-old singer from Decatur, Georgia, isn’t necessarily wrong.

Draped fully in a long velvet robe fit for royalty, Jacquees made it clear that he is the king of this tour and was ready to show his fans and naysayers his talent. Performing an hour-long set with a full lineup of background dancers and smooth choreography, Jacquees sounded confident and cool all night. Rapper TK Kravitz also hit the stage as he performed his hit collab song with Jacquees titled, “Ocean.”

Jacquees without a doubt has the potential to match R&B singers like Usher and Chris Brown. His talent is undeniable, though his tour’s arena-level production isn’t at the true auteur level of a Frank Ocean yet: You could watch any number of popular R&B singers—Miguel, Jeremih—perform on that stage. He may not be there yet. But his tour, which runs through March, shows that the crooner has the potential to prove his haters wrong. Or at least outlast their memes.