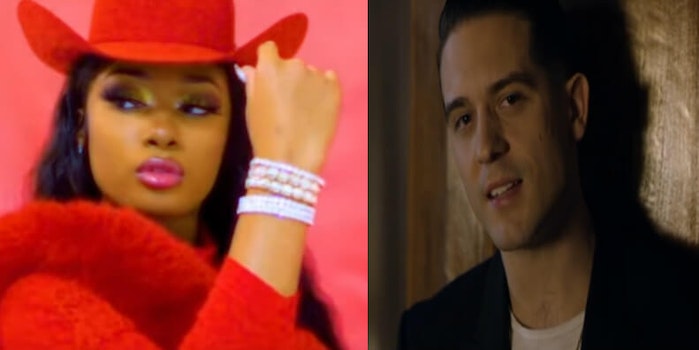 'It’s one thing you went with a white boy. But you chose G-Easy tho?'

Monday morning a video of Megan Thee Stallion and G-Eazy cozying up and kissing on a sofa at a pre-Super Bowl celebration caused the internet to collectively lose its mind.

The clip—uploaded by Megan herself—shows the white, Bay Area rapper passionately kissing all over her face and neck. The video also had the popular hip-hop song “High Fashion” with the lyrics “You don’t gotta deal with none of these n****s no more” playing in the background.

It is still unclear if the two are indeed an item or if this was simply a Super Bowl publicity stunt, but the attention is certainly working for G-Eazy. According to Trends 24, which matters Twitter trends, the rapper is currently trending at No. 1 thanks to more than 126,000 tweets.

The “Hotties,” a nickname for Megan fans, lost their minds as Twitter was soon flooded with memes mostly sharing disbelief and in some cases anguish over the twosome.

Many Black men felt slighted and shared their disappointment at her latest love interest. Some even referenced its juxtaposition with Black History Month.

“G EASY AND MEGAN THE STALLION? During BLACK HISTORY MONTH????” @ Icarus_Cash wrote while sharing a meme of a Black man with a scowl in traditional African headwear.

“The fact that the lyric ‘you ain’t gotta fuck with these n****s no more’ played in that video of  ….. lmfaoooo love you see it,” @a_blizzle joked referencing the possible theme of the lyrics.

The fact that the lyric “ you ain’t gotta fuck with these niggas no more” played in that video of @theestallion and g eazy ….. lmfaoooo love you see it pic.twitter.com/BPGB9gEokz

“Why did i just wake up to g eazy’s paper cut lips latched on to my queen megan jovon ruth pete the stallion’s ebony goddess cheek?” questioned another fan.

“I saw a video that was captioned, ‘Megan Thee Stallion and G Easy said mind ya business’ while he’s slathering his spit on her cheek and the first thing I thought was, ‘well I didn’t fucking ask’ Some things can just stay in the gallery or snapchat downloads. Eww,” @kali_mamii stated sharing her disgust.

“It’s one thing you went with a white boy. But you chose G-Easy tho? G fucking eazy?! Really?” angrily wrote @divinenesew.

@theestallion it’s one thing you went with a white boy. But you chose G-Easy tho? G fucking eazy?! Really?

We’ll update this story as we learn more.