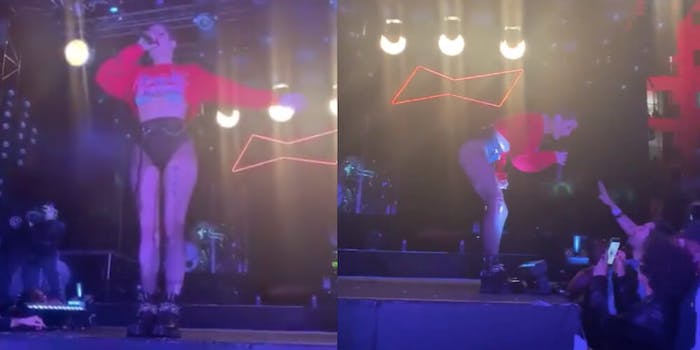 Halsey calls out concert-goer who was harassing her

The fan kept yelling G-Eazy’s name at her.

Halsey led her fans in a chant of, “Fuck that guy,” on Saturday night after one fan was repeatedly yelling out the name of her ex-boyfriend.

Halsey was in the middle of performing her set at Budx Miami when she heard a man in the audience screaming “G-Eazy.”

In a video, Halsey can be seen trying to find the culprit in the crowd.

“Who said G-Eazy? Who’s fucking yelling it? Because I’ll kick your ass out of the fucking club,” she says to one area of the crowd. “Do not disrespect me like that at my own show.”

“don’t ever let someone make u feel crazy or unhinged cause ur a woman standing up for urself.” pic.twitter.com/mpg23nhCPs

When the man wasn’t found, Halsey led the crowd in chanting, “Fuck that guy!” to enthusiastic cheers.

“Anyway, I’m gonna sing you guys the second biggest song of the fucking decade,” she says, ending the chants before continuing her performance.

“Don’t ever let someone make u feel crazy or unhinged cus ur a woman standing up for urself. Don’t tolerate disrespect in the name of being ‘nice.’ Love u,” she wrote in a story.

Halsey and G-Eazy started their relationship in 2017 after releasing their song “Him & I” together. The duo was in a relationship for less than a year before breaking it off in 2018.