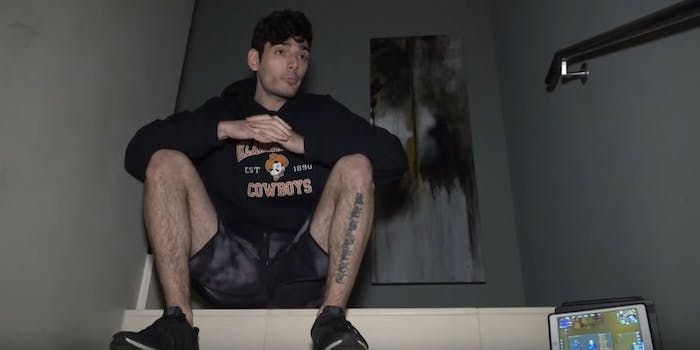 'At some point. I realized it’s not a joke anymore.'

Fans of Ice Poseidon, one of the most popular IRL streamers around, created a prank on Google Maps that affected the YouTuber, Los Angeles’ homeless population, and the people who live in his old house. And it was just plain mean.

The Los Angeles Daily News reported that followers of Ice Poseidon, whose real name is Paul Denino, recently created the Ice Poseidon Homeless Shelter on Google Maps at the mansion where Denino used to live in southern California.

That reportedly led to dozens of homeless people being misled into showing up at the Tarzana, California, address, believing that there was a place for them to stay overnight.

This prank apparently isn’t the work of Denino—who in the past has been swatted by fans and who has broadcasted his physical altercations with other IRL streamers. Instead, his fans apparently were the ones to create and perpetuate the cruel hoax.

According to the newspaper, Denino—who now lives in Austin, Texas—has tried removing the fake spot, but the listing, which had dozens of fake positive fake reviews, still remained. Reportedly, the house cost $25,000 per month to rent.

“It’s crazy stuff,” local homeless advocate Paul Read told the Daily News. “It upsets me that our homeless friends are being misled that something is going on when it’s not. It’s the difference between sleeping on cold concrete or getting a bed, a shower and a hot meal. … I find it really disturbing.”

By March, Denino said homeless people, after finding out there was no shelter, would camp out on the sidewalk. He said that angered some of his neighbors. Denino said some of his fans are trolls—he estimated that the hardcore pranksters were only a few hundred people in his fanbase—but he also admits the jokes aren’t funny.

“You’ve got some sad pathetic people on the internet that literally just don’t care about people,” Denino said. “At some point, I realized it’s not a joke anymore. Maybe the first time it was. Now it’s not funny, it’s dumb.”

A day after the Daily News released its report, the site was reported as fraudulent and the location, photos, and reviews no longer showed up on Google Maps.

“Spam and fraud have been a thorn in the Internet’s side for over a decade,” a Google spokesperson told the newspaper. “We’re in a constant race with these scammers who, unfortunately, use all sorts of tricks to try to game our system. As we shut them down, they change their techniques—and the cycle continues.”