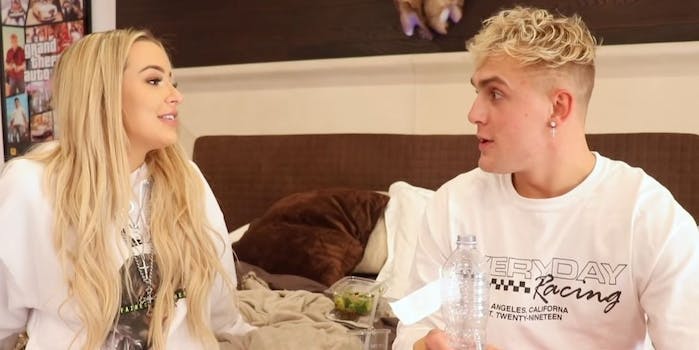 It could cost Apple and Google Play millions.

In the aftermath of the (most likely fake) wedding between Jake Paul and Tana Mongeau on Sunday, people have been expressing outrage over the poor quality of the live stream–so much outrage that Apple and Google Play are giving refunds.

According to TMZ,  it’s unclear if Halogen, the streaming app that broadcasted the wedding for a $50 fee, will pay back Apple and Google Play. But since people used Halogen on their mobile devices and because the quality was so bad—users claimed the stream was “unwatchable” because of lagging and audio issues—the two companies will ensure those who were dissatisfied with the stream will get back their money.

TMZ wrote that the stream has been viewed 66,000 times. That means the companies could be forced to pay back as much as $3.3 million.

It’s unknown if Halogen will help defray those costs, and a spokesperson told TMZ, “Many high-profile creators use Halogen to broadcast their live events. Sometimes onsite technical issues with third-party production providers used by creators can cause fans to experience issues while viewing streams.”

Paul and Mongeau have been (probably not) dating for the past few months, and after a quick engagement, the two YouTube stars–along with plenty of other content creators–traveled to Las Vegas last weekend so the two could (likely pretend) to get married.

After the two exchanged vows, somebody threw champagne on the couple, leading to a brawl that included Logan Paul and officiant Arman Izadi.

But there’s almost no chance the marriage is real anyway. Another search of marriage licenses in Clark County, Nevada, on Tuesday by the Daily Dot didn’t turn up anybody with the names of Tana Mongeau and Jake Paul, and MTV cameras were in attendance at the wedding, most likely to film for Mongeau’s reality TV show.

Plus, as this entertaining first-hand account from a BuzzFeed reporter showed, Mongeau and Paul left the event going in different directions.

So, it’s almost impossible to believe the marriage isn’t a hoax—a hoax that could end up costing somebody millions.